For Gennady Golovkin, This Was His Hagler-Leonard Moment 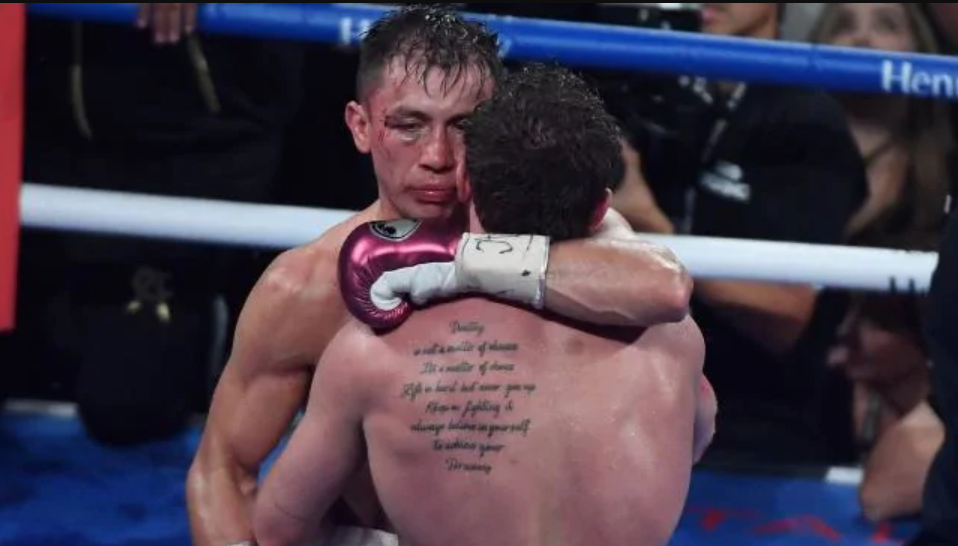 Since Gennady Golovkin was brought over to the United States in 2012, he and his team were on a quest to prove that “GGG” was the modern-day Marvelous Marvin Hagler. In certain ways, that comparison had some merit given that early in his professional career, Golovkin, while under the guidance of Universum, was basically kept away from certain boxers (namely middleweight beltholder Felix Sturm), and it wasn’t until he made the decision to come to the States as a dangerous and unknown quantity that his career took off.

Golovkin was introduced to the American public and press by an ambitious Tom Loeffler, who had been with Wladimir and Vitali Klitschko, and who had a particular goal in mind: to make Golovkin not only a recognizable champion but also a household name. Not an easy task given that Golovkin wasn’t from Mexico or Britain, but from Kazakhstan, which was best known as the home of “Borat,” the fictional character of Sacha Baron Cohen (which wasn’t exactly the most flattering portrayal of that country or its populace).

But as Golovkin started to rampage against the likes of Grzegorz Proksa, Gabriel Rosado, Mathew Macklin, Curtis Stevens, Daniel Geale, Marco Antonio Rubio, Martin Murray, Willie Monroe Jr., and Dominic Wade to ever-expanding audiences on HBO, Golovkin did indeed become an attraction, eventually moving from the small room at Madison Square Garden to the big one and selling out the Forum in Los Angeles. His bout against welterweight beltholder Kell Brook played to a packed house at the O2 Arena in London.

He was universally acclaimed as one of the premier fighters in boxing and had created commercial appeal to the point where he was able to get corporate sponsors, a rarity in this sport. But what eluded him was The Big Fight, that defining moment when he could truly transcend the game. Like Hagler, who had his share of Caveman Lees and Mustafa Hamshos, Golovkin needed his versions of Roberto Duran and Thomas Hearns.

As he was racking up title defenses and picking up middleweight belts, the big names in the division took turns avoiding him. From Sergio Martinez (who was in the late stages of his accomplished career) to Miguel Cotto and then to Saul Alvarez, they either bypassed or delayed facing Golovkin, who was still considered too risky at the time.

Finally, last September he was able to get Alvarez in the ring for what was by far his biggest payday and largest stage. At thirty-five, Golovkin had finally arrived. But instead of reaching his crowning achievement, Golovkin was handed a consolation prize in having to settle for a draw in a bout that most of the ringside press and observers believed he had won rather handily.

A year later the rematch finally took place—after a failed drug test by Alvarez scuttled their initial May 5th date—and while Golovkin got the financial terms that he demanded, the reality is that he was a year older. By the time he stepped into the ring at the T-Mobile Arena in Las Vegas on Saturday night, Golovkin was thirty-six years old. And with the type of hell-bent-for-leather style he possessed, you wondered if his physical prime was in his rearview mirror.

For a portion of the fight, it looked like the younger, fresher and faster ‘Canelo’ would push Golovkin off the cliff. Uncharacteristically, it was Golovkin who was on the back foot and visibly fatigued from the body blows delivered by Alvarez. But in what was a role reversal from their first bout, it was the older man who came on strong in the late rounds and started to land clean power shots on Alvarez, whose sturdiness matches his skill level. What started as a tense boxing match had become a memorable battle befitting a worldwide platform.

The rematch had surpassed the original not only in action, but in drama and it was a much closer contest. Most of the press had Golovkin edging it or a draw. But Alvarez won by the scores of 114-114, 115-113 and 115-113. It’s a decision that will be debated forever and a bitter pill for Golovkin, who believes that, once again, “Sin City” has taken something from him unjustly.

In twenty-four rounds of action against Alvarez, exactly one judge had him up on their cards.

For Golovkin this was his Marvelous Marvin Hagler-Ray Leonard moment, where an accomplished career is forever tarnished by an embittering decision. Golovkin walked out of the ring, not speaking to HBO’s Max Kellerman, disappointment and anger etched all over his face.

It’s evident that after a long amateur career (that spanned well over three hundred fights), and a physical style as a professional, that he is now clearly on the descent. His accurate jab can hide some of his decline, but he is no longer the bogeyman who racked up twenty-three consecutive KOs. To put this into perspective, Hagler was just a month shy of thirty-three when he faced Leonard in 1987. After that contest he would walk off into the sunset and eventually into action films in Italy, where he has lived in relative privacy after his Hall-of-Fame career.

What’s ahead for Golovkin isn’t so clear. But after receiving post-fight stitches, he did eventually meet with the press. He was as gracious in defeat as you could expect, and while Hagler called it quits, it doesn’t seem Golovkin has such plans. His final words to the media gave an indication that he will move forward.

“Thank you very much for everything. This is a great fight, seriously. Congrats Canelo and team. Today he is champion. I come back guys, I come back.”

191 Edgecombe: Kid Norfolk and the bootstrap legacy of Harlem—Springs Toledo, City Journal
When Springs Toledo visited Harlem in search of “the ghost” of Kid Norfolk, a dangerous light heavyweight with wins over Harry Greb, Tiger Flowers, Billy Miske, Battling Siki, and Jack Blackburn, he encountered more than just a street address: he found signs of a once-vibrant neighborhood on the comeback. Here he details the parallel lives of Norfolk and the Harlem Renaissance.ODD COUPLE: How a Heavyweight Champ and a Cartoonist Flouted Race Hate—Michael Tisserand, Daily Beast

Tad Dorgan was a cartoonist for the Hearst newspaper chain, a man-about-town, and a prolific generator of American slang. He also shared a long friendship with erratic and embattled Jack Johnson, the heavyweight champion of the world, as well as the most controversial cultural figure of his time.

In this photo essay, culled from an exhibition at the Philadelphia Museum of Modern Art, Larry Fink, who has long been fascinated by prizefighting, produces stark portraits of spontaneous moments at various fight cards, and quieter instances behind the scenes in gyms and locker rooms. These images capture that unique combination of raw emotion and quotidian intervals that mark boxing, a world composed of extremes.

“I don’t think there was ever a fighter who did not know fear on entering the ring. And don’t let anyone tell you differently. If he does, he’s a liar. By fear, I don’t mean that I was actually afraid of my opponent. My great fear was of losing. I was afraid that I wouldn’t please. I wanted to be accepted by the crowd. The whole thing scared me. The lights, the crowd, the noise. The excitement gets you. But once the bell rings, and you rush into action, your fear disappears. Until you hear the bell, however, all kinds of crazy thoughts enter your head. Many a time I’d climb into the ring, my head would pound and I’d think to myself, ‘This is awful.'” —Mickey Walker

BAZOOKA: The Battles of Wilfredo Gomez/em>