This article provides some color about Ron Lyle, the legendary Denver heavyweight, whose biography, Off The Ropes: The Ron Lyle Story, is now available from Hamilcar Publications.  This book is a revised edition, with a new foreword by Showtime boxing analyst and International Boxing Hall of Fame member, Al Bernstein. 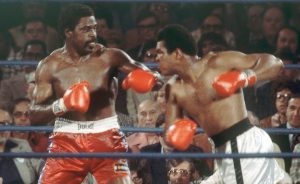 Muhammad Ali and Ron Lyle met each other at the Las Vegas Convention Center in 1975 and fought a war of attrition before Ali lowered the axe and showed there was a level between the pair. In his only world-title fight, Denver’s Lyle was able to display strength, power, and cunning and win on the scorecards for ten rounds. But despite a strong effort, Lyle’s challenge ended with proof not only of Ali’s immense talent and ability, but also his capacity to negotiate a fight round by round, showing the shrewd tactical brain of the Louisville native.

Ali was defending for the second time the WBA and WBC titles he had snatched so dramatically from George Foreman in the epic “Rumble in the Jungle” the year before. The champion had battered the intensely brave Chuck Wepner into submission less than two months before the Lyle fight.

Ali was was a sharp strategist proficient at assessing his opponent’s strengths and weaknesses and adapting accordingly over the course of a fight. As a result, and even though Lyle was performing well over several rounds, Ali knew he could use his speed and accuracy to eventually land pinpoint shots and weaken a visibly tiring Lyle down the stretch.

In the early stages of the fight, Ali tried to initiate a similar version of the “rope-a-dope” strategy he used so effectively against George Foreman in Zaire, but Lyle remained disciplined and opted to jab and pick away at his stationary adversary—versus going in with all guns blazing as Muhammad had anticipated. Lyle used his head in an illegal manner at times in the second and third rounds, but the referee failed to admonish the challenger.

Using swift movement and allowing his hands to drift dangerously low at times, Ali took to the balls of his feet in rounds six and seven and began potshotting Lyle with stinging jabs. Lyle’s confidence was growing no doubt and the crowd became momentarily impatient in the ninth as Ali continued to circle the ring as wily Lyle chased and harried him.

Ali had been busy right before the start of the bout, leaning over the ropes and telling fans that he was ready to wear his opponent out. Lyle had made a point in the prefight build-up of announcing that he was wise to Ali’s tactics, however, and the crowd made their feelings known with emphatic boos whenever the champion fell back on the ropes. Always the showman, Ali was playing his opponent and the spectators in equal measure. Ali’s trainer Angelo Dundee told his fighter at various points that Lyle was “ready to go,” but it appeared to be more of a psychological trick, as Lyle remained competitive.

Early in the eleventh round it became apparent immediately that Lyle was extremely fatigued and pawing with his shots. Ali sensed that the time was right to step up his attack and finish his foe. Spearing in a couple of distracting, range-finder jabs designed to offset Lyle’s rhythm, Muhammad threw a right hand and began unloading combinations on his chiseled opponent. Lyle covered up and lay against the ropes in a vain attempt to withstand the storm.

Ali was an unforgiving finisher, however, and he even took half a step back, drawing Lyle briefly out of his shell before peppering him with several more blows. Even though Lyle protested the referee’s inevitable intervention bitterly, the truth was that this brave, game prizefighter, battle-hardened from the streets and the penitentiary, had given his all and had nothing left. At the time of the stoppage Lyle was ahead on two of the judges’ scorecards (46-45 and 49-43), while the third had it level at 46-46. There were four rounds left and Ali was clearly taking over when referee Ferd Hernandez called the fight.

Some of Muhammad Ali’s best work may have been behind him at this point but he still had enough left to go on and record some excellent victories after this successful defense. Ali settled the score with old nemesis Joe Frazier when the pair clashed in Manila, just months after Ali had defeated Lyle. Remarkably, Ali fit in another defense, just six weeks after beating Lyle, when he outpointed Joe Bugner in Malaysia. Wins over Ken Norton and big-punching Earnie Shavers were yet to come but Ali was starting to slide when, in 1978, he split two fights with relative novice Leon Spinks. His final two defeats, to Larry Holmes and especially Trevor Berbick, were unnecessary spectacles that did little to serve Muhammad’s declining health in later years.

Ron Lyle ended his career in less auspiciously, but that’s not to say that he didn’t leave an indelible mark on the heavyweight division with his wars against the George Foreman and Earnie Shavers that followed the Ali defeat. Losing to Ali was no disgrace, especially given the fact that he was ahead on two of the cards at the time of the stoppage, but this was the only time he contested any version of the world titles.