This article provides some color about Ron Lyle, the legendary Denver heavyweight, whose biography, Off The Ropes: The Ron Lyle Story, is available from Hamilcar Publications.  This book is a revised edition, with a new foreword by Showtime boxing analyst and International Boxing Hall of Fame member, Al Bernstein. 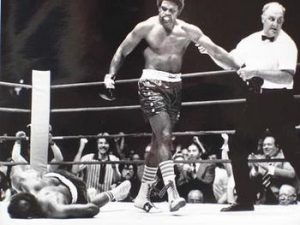 Two heavyweight rivals going to war always creates a level of excitement that’s hard to replicate in any other division in the sport of boxing. Take a couple of big, physical fighters, both with great heart, determination, and one-punch knockout power and fans feel the hairs stand up on the back of their neck, or cutis anserina, anticipating such a match-up. The 1975 clash between Ron Lyle and Earnie Shavers covered all these criteria, from the lead-in to the fight right up to the brutal ending in round six.

Even though no title was being fought for in the Denver Coliseum, the promoters and organizers putting on the bout knew action was guaranteed as Denverite Lyle hosted Alabama’s big-punching Shavers. Lyle had thirty wins, while Shavers needed one more win to hit fifty. Ron had only lost against the best, while Shavers had lost of to some fighters lower on the boxing talent ladder. But Earnie was a serious puncher who common-opponent Muhammad Ali described later as the most concussive hitter he ever faced. Lyle had lost his last two (though one loss was to greatest-heavyweight-ever Ali) and needed a big performance when the two met head on. Rallied by a capacity crowd, expecting to be thrilled from the first bell to last, the chance that the winner would be declared after a 15-round decision was thin. This proved true, and the contest did not disappoint.

In the opening round Lyle circled away from Shavers’s big right hand, using the entire ring to keep the big man working. Shavers stalked, looking to trap Lyle and throw his vaunted power shots, but “The Black Destroyer” wasn’t cutting the ring off effectively. Lyle lay on the ropes in the middle of the round and allowed Shavers to tee off, which would become a common feature of the fight. That wasn’t of course an advisable strategy for the Denver boxer, who would have be better off throwing the jab to create distance and working on tying Earnie up when the pair got close. The crowd rose in anticipation as Lyle pinned Shavers against the ropes and worked furiously to the head and particularly the body as the round closed.

Lyle took to the front foot briefly in round two, but quickly thought better of it as the pair continued to gauge each other while watching the considerable power the other man possessed. Ron’s nifty head movement evaded some chilling Shavers left hooks and a looping right hand. Soon after, Lyle stretched against the ropes for too long and allowed Shavers to size him up twice with the left hook before Shavers finally connected flush and sent Lyle’s head spinning and his frozen frame to the canvas for a count. Luckily for Lyle, the knockdown occurred right at the end of the round; and even though Shavers raced across the ring to try and finish the job, he was unable to do so as the bell rang. Lyle later said that instead of his body falling to the canvas, it felt like the canvas came to him.

At the beginning of the third Lyle tried to bluff Shavers into thinking he was not hurt and came roaring out of the corner throwing wild right hands. Shavers accepted the bait willingly and pushed Lyle to the ropes, preferring to pummel his opponent with left hooks and right hands to head and body. Lyle needed every ounce of his trademark resiliency to negotiate a passage through the rest of the contest, let alone the rest of the round. Ron again insisted on spending time languishing on the ropes, trying to counterpunch. He had success but his defense was never strong enough to sustain such a strategy without getting hit with significant leather.

By round five Lyle’s body shots, together with Shavers’s work rate, were starting to have a draining effect on the Alabama slugger’s gas tank. Shavers was standing still for long enough to allow Lyle’s right hand to find a home more frequently. Lyle sensed his man had come out wearily in the sixth and started nailing him with right hands. Earnie’s reserves were depleting fast; Lyle increased the volume and Shavers suddenly appeared helpless on the ropes. The final two blows were unnecessary and it is doubtful today that a referee would’ve allowed Earnie to take the finishing shots while showing no defensive posture whatsoever. Shavers rolled around on the canvas and tried desperately to haul his hulking frame up, but he was counted out, much to the delight of Lyle’s fervent Denver following.

Buoyed by his win over Shavers, Lyle went from frying pan to fire as a vacant NABF heavyweight title shot at George Foreman materialized. Big-punching Foreman was returning for the first time following his infamous ‘Rumble in the Jungle’ loss to Muhammad Ali in Kinshasa. Lyle and Big George went to war in one of the all-time classic heavyweight bouts before an exhausted Lyle was exorcised in round five. Lyle boxed on and won many of his subsequent bouts but never truly mixed at the highest level again. A 1980 knockout loss versus unbeaten banger Gerry Cooney forced the Denver man to hang up the gloves. Ron did return, fifteen years later, to record four wins but the fire was out and the comeback amounted to nothing. He spent his later years moving back and forth between Las Vegas and Denver. In Vegas, he worked security for several casinos and at one time trained a handful of fighters at Johnny Tocco’s legendary Ringside Gym. In Denver, Ron spent the last years of life realizing a goal of teaching young people about boxing and life at the Cox-Lyle Boxing Center before he passed away in 2011 at the age of seventy.

Shavers’ career, on the other hand, was still intact despite his loss. Ernie strung together a series of low-key victories before going the distance in a commendable points loss to Muhammad Ali in 1977. Shavers then lost over the distance to 26-0 Larry Holmes and got back on the knockout trail (including an impressive early KO of veteran Ken Norton) before losing to Holmes in a 1979 rematch. By this stage, Larry had improved to 31-0, had the WBC title by virtue of defeating Norton in 1978, and was enjoying a prime run—where his movement and perfect jab were dominating opponents before he laid down the axe to finish them.

Shavers kept the Holmes return-bout competitive but was dismissed in the eleventh. Earnie boxed on and continued to knock out lesser competition but lost whenever he stepped up. Interestingly, and similar to Lyle, he returned to the ring in 1995 (after an eight-year absence, as opposed to Lyle’s fifteen) to win and lose a couple of ill-advised return bouts given that Shavers had previously retired due to eye issues. Shavers later spent his time working as a bouncer in a bar in England.

“Off The Ropes is absolutely recommended reading.”―Gary Lucken, Boxing Monthly

Off The Ropes: The Ron Lyle Story, with a new foreword by Al Bernstein, is available everywhere books are sold.

Here is some information to get you started learning about what made Lyle so special:

We use cookies to ensure that we give you the best experience on our website. If you continue to use this site we will assume that you are happy with it.Ok