This article provides some color about Ron Lyle, the legendary Denver heavyweight, whose biography, Off The Ropes: The Ron Lyle Story, available from Hamilcar Publications.  This book is a revised edition, with a new foreword by Showtime boxing analyst and International Boxing Hall of Fame member, Al Bernstein. 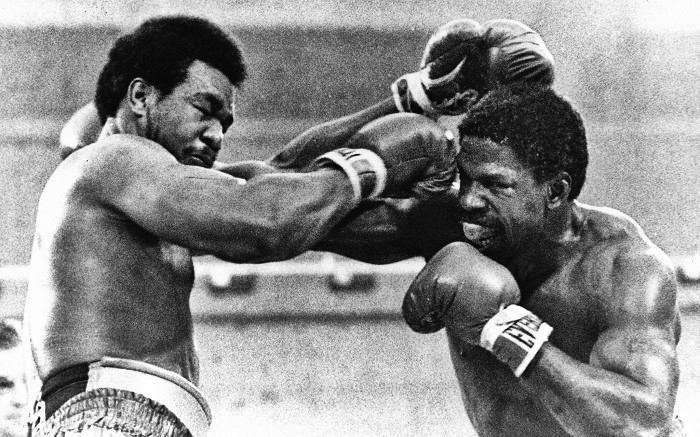 Looking at all of the famous rumbles littered across decades of prizefighting in boxing’s premier division, few have matched the astonishing ferocity displayed by former heavyweight world champion George Foreman and top-five ranked contender Ron Lyle when the two titans clashed in Caesars Palace, Las Vegas in 1976.

Lyle learned to box during a tough seven-and-a-half-year stint in prison, and even though he was never won a heavyweight title, the man from the streets of Denver was always tough and competitive enough to push the best fighters hard.

Meanwhile, George Foreman’s mental strength and boxing psyche were being questioned in the lead up to the fight, as many believed that he would still be nursing the mental scars caused by a loss to Muhammad Ali in Zaire. Working on the night for ABC television, alongside Howard Cosell on the mic, number-one-ranked heavyweight contender Ken Norton questioned not only Foreman’s mindset but also his stamina after he was unable to sustain the attacks launched by the wily, tactically astute Ali fifteen months before.

Would the Denver banger Lyle be able to take advantage of these factors and send Foreman’s career truly into freefall? It was a big opportunity for Lyle to add to his reputation considerably and a concerned Foreman was forced to respond.

In the opening round both men skipped into the center of the ring and Foreman immediately evaded a swinging right hook from Lyle, who was prone to throwing the occasional wild shot during his long career. Ron also had a tendency to leave his hands low at times and had to call on his chin and energy reserves to push him through fights. After nearly three minutes of posturing by the pair, Lyle landed a flush right hand that stunned Foreman and brought the crowd to life. Ron followed Foreman across the ring and landed a left hook on the Texan but the round ended and referee Charley Roth (himself a solid heavyweight in his heyday) intervened and Foreman’s spinning head received some much-needed rest.

Lyle piled on the pressure throughout the second round and even the aberrant two-minute round could not stem the ambition of Lyle, who repeatedly found a way to get past Foreman’s vaunted left jab. George was able to pin Lyle against the ropes towards the end of the round as Foreman let loose with thumping left-right combinations. Foreman’s trainer Gil Clancy could be clearly heard shouting, “You’ve got to hook to the body, George” more than once. Both men took a slight breather in the third as Foreman used his orthodox range finder more often while Lyle set himself up to land the right hand, time and again.

Lyle landed a right cross again in the fourth and put on pressure, knocking Foreman down and threatening the indestructible image Foreman had developed during his long reign—and had been so badly damaged by the Muhammad Ali fight. The man who had so brutally disposed of top fighters like Ken Norton and Joe Frazier was suddenly looking like anything but invincible as Lyle, undaunted, hunted his man down for the kill.

After his slow start, Foreman struck back instantly in one of the great heavyweight boxing exchanges. Lyle’s porous defense exposed and he was knocked on his back from a Foreman barrage. After Lyle got up, Foreman pinned him against the ropes and threw arm punches with both hands, as his begged him to attack the body and bring Lyle’s hands down. George had little time to think about anything else, though, as Lyle exploded with a perfect left hook that shook Foreman and sent him stumbling backwards. Lyle landed a right hook and then a right hand that dropped Foreman and he hit the canvas like a bag of cement, the side of his face pressed against the canvas. Amazingly, he beat the count and, clearly on queer street, staggered back to his corner.

This was proving to be battle of will—rather than skill—and the man with the biggest heart and greatest accuracy would prevail. Lyle had a reputation for growing stronger as rounds passed but Foreman’s power remained from first bell to last. Referee Roth split the fighters in the fifth as they grabbed and grappled inside, trying to gain ground and get some punching leverage. Lyle found a home for his left hooks and looping right hands once again as a hurt Foreman desperately scrambled to regain his senses. Hands swaying around his waist, head fluttering in the wind, Foreman seemed close to going out on his shield, before he mustered up a series of hard blows to push back a clearly lethargic Lyle and finally take control of the fight. Foreman was always a devastating finisher and wasn’t letting Ron Lyle off the hook this time.

The Vegas crowd rose from their chairs excited as Lyle staggered into the ropes. Foreman closed in and peppered him with shot after shot. Cries of “Stop it! Stop it!” could be heard emanating from concerned observers at ringside. Referee Roth finally waived off the fight as an exhausted Lyle lay in a heap on the canvas.

Lyle never boxed on such a big stage again, although he did win a split decision over Joe Bugner in the same venue the following year. Inconsistent performances characterized his final fights and after up-and-coming puncher Gerry Cooney knocked him out in one round in 1980, Lyle retired. Ron returned fifteen years later in 1995 to record four knockout victories against club fighters, but the fire had burned out and Lyle moved into coaching and lent his vast ring and life experience to young pugilists before he passed away in 2011 at seventy.

Foreman’s career took a very interesting path after the Lyle KO win. Big George not only found fame and considerable fortune selling his grills, but he also later became an expert analyst for HBO Boxing. After beating Lyle, he knocked out Joe Frazier and won a string of bouts before losing in 1977 to Jimmy Young and opting for retirement. Remarkably, Foreman returned to the ring 10 years later in 1987 and embarked on an historic run that culminated in a 1994 knockout win over Michael Moorer to hand George, once again, the heavyweight title. The veteran fought for the final time in 1997 when Shannon ‘The Cannon’ Briggs outpointed him, controversially, in Atlantic City.