Constantin Bejenaru asked his employer one day for some time off. He had a fight coming up, which meant he needed to hunker down in his Brooklyn training camp for several weeks and not just for a few days. He liked his line of work, installing solar panels for Tesla, but he also knew where his priorities lay.

“They said, ‘No,’” Bejenaru recalled during a recent workout at the Underground Boxing Gym in Brighton Beach. “So, you know, I left.”

It may not have been the economically wise thing to do, considering that he had a family to feed, and his fight purses were so insignificant that his trainer-manager Ilia Mesishchev routinely waived his cut. Moldovan cruiserweights, after all, are not exactly in high demand, no matter how enthusiastic Bejenaru’s then promoter, New York staple Joe DeGuardia, claimed to be about this particular one. But boxing was never just about collecting the occasional paycheck for Bejenaru. If that were the case, he would have ditched the sport a long time ago when it became apparent that his career — some ten-odd fights in all — had reached an impasse.

As it pertains to holding down a day job, Bejenaru would soon land on his feet again. His friends connected him with Levco, one of the largest heating oil suppliers in Fairfield County, Connecticut. It was a stable gig that brought him into close contact with people he could never have envisioned back home in the rustbelt Republic of Moldova. Millionaires and their mansions (“castles,” as Bejenaru calls them) with indoor gyms and guest homes. This was old money territory: New Canaan, Darien, Greenwich, et al., where wealth and social decorum meant housewives always offered coffee and cookies. Levco’s head office is only ten minutes away from his home in Shelton, where he lives with his wife and two kids, a three-year-old son and five-year-old daughter. Best of all, the job was flexible. His new boss, a former Judo specialist, had no qualms with Bejenaru taking extended leaves of absence, especially when combat called. 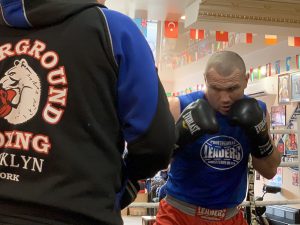 This Saturday, Bejenaru, 14-0 (4), will take on undefeated bruiser Arsen Goulamirian 25-0 (17), in the latter’s hometown of Marseille, France, for a piece of a WBA cruiserweight trinket. It is in many ways a culmination of a long, winding, and so far thankless professional career that has paid him in peanuts and given him long spells of inactivity. As such, Bejenaru is grateful for the opportunity. He’s also aware that he wouldn’t be in this position without the help of certain close confidants, like his boss, who understands the unusual demands of prizefighting; his trainer, who scooped him up years ago from a bad managerial deal; and longtime friend and advisor, David Berlin, the ex-director of the NYSAC who helped Bejenaru find his promotional footing this year by bringing him to Dmitry Salita. It was Salita who immediately scheduled a Bejenaru a summer tune-up bout and promptly lined him up for Saturday’s potentially life-changing title shot.

“He beat my fighter Zubov a few years ago on Shobox, so I knew he was a good fighter,” Salita said. “When I got the offer to sign him, I jumped on it. I knew he was potentially one of the best cruiserweights in the world. He beat some solid undefeated fighters, and I got him rated in the WBA.” 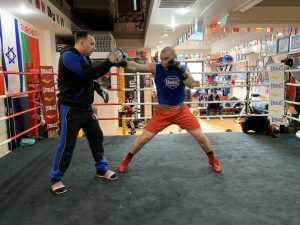 “Of course, there is no guarantee that I am here,” Bejenaru said. “All these years that I was with Mr. DeGuardia was horrible. You know, just waiting, six-and-a-half years.”

“Whatever was done was done,” said Mesishchev, who preferred to take the high road. “Never look behind your back. Whatever was good or whatever was bad. If it wasn’t Joe DeGuardia, maybe it’s somebody else.

“What not kills you make you stronger.”

Still, the bare facts are this. Under DeGuardia’s watch, Bejenaru fought a total of three times from 2016 to the summer of 2019. Never mind that he won all of his step-up bouts against fighters who were the presumed favorites in Alexey Zubov, Stivens Bujaj, and Thabiso Mchunu. There didn’t seem to be much of a plan for him. A decision against South Africa’s Mchunu, a well-regarded cruiserweight contender, should have spurred him to new heights. Instead, he received a scant purse of roughly $9,000 and disappeared from the ring for eighteen months. Efforts to put him into the World Boxing Super Series tournament were unsuccessful.

“Nobody was moving him or trying to fight for him,” Mesishchev said. “Just a lot of nothing. He’s been going after this title for thirty years. Just like every other boxer in the world. It really is a tough business.”

It is even tougher for cruiserweights, especially in America, where promoters have traditionally not invested in the division. Although the rousing success of the WBSS cruiserweight tournament last year did much to improve the general standing of the weight class, it still remains moribund stateside. To compound matters, Bejenaru is landlocked at the weight: he is too small to contend with today’s giant heavyweights and too big to go down to 175, where conceivably there would be far better economic opportunities. 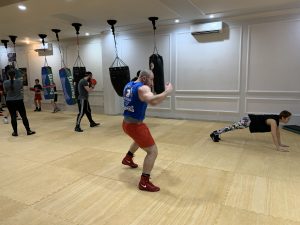 “No many names in cruiserweight,” Bejenaru noted. “They don’t put money to these boxers.”

Regardless, Bejenaru never allowed this harsh reality or his promotional troubles warp his sense of ambition. He stayed in the gym, ran every day, and tended to his family, all while filling oil tanks for Levco’s 3,500-household customer base.

“This is my dream,” Bejenaru said. “I started boxing when I was nine-years-old, in a dirty underground, without any lights. All my childhood was (spent) in boxing, so for me I want some result. I feel like I can do more than just have ten professional fights. I think I can be somewhere at the top. I want to go to the end.

“Boxing is my main job. My target. My dream.”

Saturday’s fight will not take place under ideal circumstances. Bejenaru is on foreign turf, in his opponent’s backyard, which raises the usual concerns about officiating and judging. Neither fighter nor trainer seemed much concerned about those aspects, though. They note that this is the fourth time that Bejenaru is going into a fight as a clear-cut underdog. So far, they have a 100% success rate.

“It’s in Arsen’s territory, but it’s okay,” Mesishchev said. “I actually prefer it. It’s a little bit easier to fight in his territory than with his fight at home. Too many stuff in the head, too many distractions here.”

“Doesn’t matter,” he said. “When I go to ring, I’m by myself, and my trainer is in the corner. My eyes are on my opponent and my ears are on my trainer. No one surrounds me. It’s just me and my opponent. The ring shows who is better.” 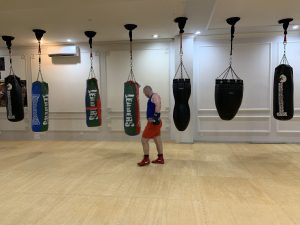 The Goulamirian fight will net Bejenaru the biggest payday of his career, about $40,000. Hardly jaw-dropping, given the money floating around in the sport these days, but it is a significant improvement nonetheless—and that may be putting it lightly.

“I will make more in this one fight than [in] seven years with DeGuardia,” Bejenaru quipped.

And yet despite his haphazard boxing career thus far, Bejenaru has already crafted something of the immigrant’s dream, white picket fence and all. In Shelton, he lives with his family in a three-bedroom, 2,200-square-feet home with a power wall in the basement and thirty-two solar panels on the roof, all of which he personally installed. On a recent December evening, his daughter waited outside with a plate of cookies to hand out to Santa, who was being chauffeured around town in a fire truck for the city’s annual toy drive. It is the kind of life unimaginable in Moldova. His daughter often corrects his rudimentary English, but she is too young to understand the concept that her father beats people up for a living. So, for this fight, Bejenaru simply told her, “Daddy need to go and beat a bad guy and come home.”

About Sean Nam 30 Articles
Sean Nam has written for The Cruelest Sport, Undisputed Champion Network, and The Sweet Science. His non-boxing writing has appeared in New Rambler Review, Slant Magazine, Atlas Obscura, Rain Taxi, Mubi Notebook, The Brooklyn Rail, and Cineaste. In 2017, he curated the Boxing on Film series for the Anthology Film Archives in New York City. He is a member of the Boxing Writers Association of America.