Ever since Brooklyn button man Bugsy Siegel opened the Flamingo Hotel in 1946, Las Vegas has been the pit stop for casual, catchall amorality in the United States. But not even Sin City seems willing to let it ride on Saul “Canelo” Alvarez, whose failed “A” and “B” samples (spiked by Clenbuterol) kayoed the biggest moneymaking fight of the year: a scheduled May 5 pay-per-view showdown against Gennady Golovkin at the T-Mobile Arena.

Alvarez, who withdrew from the fight two weeks ago in anticipation of disciplinary action, was suspended by the Nevada State Athletic Commission for six months, retroactive to February 17. This sanction, one with all of the regulatory impact of a defective flyswatter, merely delays the payoff for a few months. Nevertheless, the punishment meted out against Alvarez seemed, paradoxically, to violate the natural (dis)order of a sport that exemplifies, in all its excess, the winner-take-all ethos of pure capitalism. To some, the fact that the NSAC scuttled a bonanza such as Alvarez-Golovkin II was shocking. After all, the business of Nevada is business itself, even if much of it is of a decidedly shabby nature.

The cancellation of Alvarez-Golovkin II does, however, have its costly precedent. In 2002, the NSAC denied Mike Tyson a license to fight under its auspices, thereby banishing Tyson-Lennox Lewis, the biggest matchup in years and a financial supernova, to the boxing backwater of Memphis, Tennessee. But nixing Tyson hardly required the application of some sort of categorical imperative. In addition to his numberless misdeeds—no-contests, public meltdowns, a failed drug test, in-the-ring cannibalism—Tyson also generated mass chaos whenever he fought. Stampedes, riots, and general lawlessness followed Tyson the way paparazzi stalked Princess Diana. At times, the dreaded Tyson Effect even spilled out into the straight world. In 1996, Tupac Shakur was murdered in a drive-by shooting after leaving the MGM Grand Arena, where Tyson had just stopped Bruce Seldon with a phantom punch. Denying Tyson a license in Nevada was an easy choice for the simple reason that the money he generated for bookmakers, casinos, and hotels was offset by the negative publicity and property damage his fights often incurred.

If there is a figure who exemplifies just how lax the NSAC can be, it is Floyd Mayweather, Jr. A few years ago, Mayweather wound up at an NSAC hearing for staging to-the-finish sparring sessions that were featured on “All Access” and walked away without as much as a pandy for his actions. Being a human cash register for a municipality has its advantages and Mayweather proved it—repeatedly. When Mayweather applied for a promoter’s license, for example, the NSAC ignored its own moral turpitude clause and rubber-stamped his request.

Most recently, the NSAC approved a fight between Mayweather and Conor McGregor—a man who had never had a professional boxing match—as flagrant an act of bureaucratic malfeasance as can be imagined in a bloodsport. And when Mayweather publicly confessed to carrying McGregor, something no state with legalized gambling wants to hear, NSAC executive director Bob Bennet, who lords it over six-rounders with regal aplomb, was nowhere to be seen.

Although Alvarez is a star of rather dimmer wattage compared to Mayweather, the fact remains that he is the biggest moneymaker in North America, and the high rollers and aficionados set to pour into Las Vegas to see him face off against Golovkin on May 5 would not only have benefited the T-Mobile Arena properties, but every hotel, bar, restaurant, and casino within the vicinity of the Strip.

Aside from its own “strict liability” regulation regarding banned substances, the NSAC was forced to act by a unique circumstance: it is one of only four states in America where betting is legal. In the internet age, wagering on prizefights at a site-specific locale is likely nearing extinction, but a betting handle is a betting handle, and Nevada both profits off of it and is also responsible for protecting bettors. Knowingly allowing a sports contest to proceed despite the iffy biochemical makeup of one of the contestants is a potential liability landmine.

For Nevada, Canelogate will likely only be the first in a series of future migraines. As long as fighters enroll in VADA (Volunteer Anti-Doping Agency), Nevada will see more and more prefight drug failures.

As for Alvarez, who rose from poverty in Juanacatlán to become the richest prizefighter ever to hail from boxing-mad Mexico, Clenbuterol is unlikely to send him to the celebrity equivalent of a leprosarium. The overriding question here is simple: did Alvarez knowingly take PEDs and, if so, when did he start? It should be noted that, last year, Golovkin represented the first time Alvarez has struggled in the ring since his loss to Floyd Mayweather, Jr. More telling, perhaps, is the fact that Alvarez looked unusually fatigued by the fifth or sixth round of a technical match that had produced few extended firefights from bell to bell.

To a certain degree, Alvarez still has plausible deniability on his side. Clenbuterol is an issue in Mexico, so much so that in 2016 the NFL warned its players about consuming meat south of the border (as well as in China). Alvarez has maintained his innocence, cooperated with NSAC, and has been so popular for so long that these headlines may recede with time. Still, to have his accomplishments retroactively doubted (a natural consequence of doping) must surely pain a man who had reached the pinnacle of his profession. To make matters worse, this PED scandal serves as a milestone, of sorts. Saul Alvarez is the biggest star ever to fail a drug test for chemical enhancement. A short list of notable poppers over the last twenty years includes Erik Morales, Lamont Peterson, Andre Berto, Alexander Povetkin, Julio Cesar Chavez, Jr., James Toney, Felix Sturm, Antonio Tarver, Luis Ortiz, Tyson Fury, Shannon Briggs, Orlando Salido, and Fernando Vargas. Only Roy Jones, Jr., whose failed drug test in the early 2000s was barely covered by the media, compares to Alvarez. That list highlights just how prominent doping is in boxing, and it hints at just how hard it will be to eradicate it. 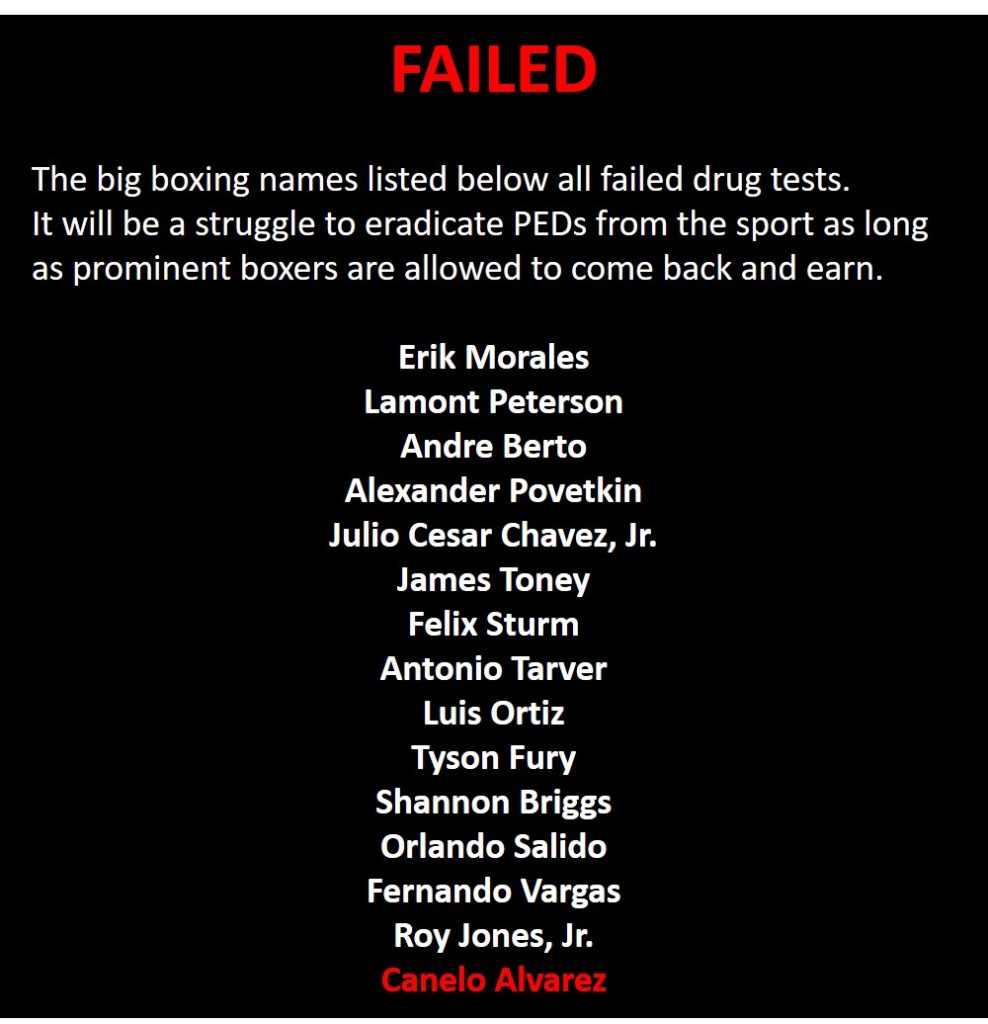 Of the myriad reasons PEDs will continue to pollute boxing—a fractured regulatory apparatus, public apathy, the deprived backgrounds of many pugs for whom prizefighting represents the only main chance they will ever see—one of the biggest may be that this sport, which is often an extension of underworld subcultures across the country, is overrun by charlatans and grifters. Trainers, seconds, managers, booking agents, and promoters are often drawn from a seemingly bottomless wellspring of hustlers. But worst of all are the motley entourages that surround fighters from dingy prelims to the marquee lights of New York City, Los Angeles, or Las Vegas. Even a near-flawless fighting machine such as Roberto Duran, at the peak of his brutal fame after defeating All-American glamor boy Sugar Ray Leonard, found himself deferring to street rubes as his rematch with SRL neared. Between wolfing down midnight hamburgers delivered to his hotel room by his cronies and gorging on diuretics as if they were Jujubes, Duran was doomed before he ever stepped into the ring in New Orleans. Part of his downfall was caused by an inability to leave the past behind. While most fighters are disciplined athletes whose adherence to monastic training regimens belies their often troubled upbringings, they are also susceptible to the callback of the streets.

If one considers PEDs a part of the sordid boxing netherworld, then its rampant use makes sense. And that boxing netherworld might have been described the same way Milton described Hell: “And in the lowest deeps, a lower deep.” We are all familiar with the dark tropes of boxing: the unscrupulous manager in The Set-Up; the mobsters tormenting Jake LaMotta in Raging Bull; the leeches who battened off of Toro Moreno in The Harder They Fall; the cutthroat Machiavellian promoter in Casino Moon. These secondary characters—spiteful bit-players—found invariably beyond the ropes, cloaked in noirish chiaroscuro and skulking through a subterranean world on the margins.

But sometimes, yes, sometimes, it is the fighter himself caught in the shadows.

About Carlos Acevedo 44 Articles
Carlos Acevedo is an award-winning boxing writer and was the founder of The Cruelest Sport and is a member of the Boxing Writers Association of America. His work has appeared in Inside HBO Boxing, Undisputed Champion Network, Boxing News, Remezcla, Boxing Digest, and Esquina Boxeo.  His stories “A Darkness Made to Order” and “A Ghost Orbiting Forever” both won first place awards from the BWAA. He is a member of the International Boxing Research Organization (IBRO). Carlos is the author of Sporting Blood, published by Hamilcar Publications. Connect with Carlos on Twitter @cruelestsport.