Former WBC super-middleweight champion Sakio Bika can think of many places he would like to be, and a suburban Sydney shopping center packed with early Christmas bargain hunters escaping the harsh afternoon sun isn’t one of them. The Cameroonian champion has called Australia home for nineteen years and was due to travel to Birmingham for an unlikely bout with fifty-five-year-old Nigel Benn on November 23 at the Resorts World Arena in Birmingham, England, before the bout was canceled due to Benn sustaining an injury.

The majority of the boxing fraternity was concerned about Benn’s health after two decades out of the ring against an aggressive and seasoned pressure fighter like Bika. Curiously, like most boxers, Bika’s ferocity in the ring is matched by his unstinting courtesy outside of the ropes. He apologizes profusely for being slightly late, then starts talking softly in French, before switching seamlessly to English. Bika refuses to criticize Benn directly but remains confused on what happened to their planned bout.

“I will never speak badly about Nigel Benn, he’s a legend and he should be respected for that. When I first heard about the fight, I wasn’t sure whether it was for real, but then I saw he was serious about it, then suddenly heard about his shoulder injury and that it was over, which left me confused. Was he scared?  I don’t know. I was disappointed, but it’s the same thing I’ve faced my whole career, I’m not seen as an Australian, in boxing I’m always seen as this dangerous African, and nobody wants to fight me, there’s nothing to be gained from it.”

Bika was born in Cameroon’s largest city and economic hub Douala and considers his childhood a lucky one. The Bika family didn’t consider themselves wealthy, but Sakio’s father had consistent work and food was always on the table. As a young man, he was captivated by the Cameroon football team, the Indomitable Lions at Italia 90 and tried to emulate the skills of Roger Milla in rough games on the street before a knee injury changed his sporting destiny forever. 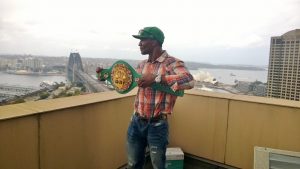 “Football is such a powerful thing in Cameroon, and we grew up loving those players. I wanted to be a footballer like most young children, but I hurt my knee playing, and that’s how I got into boxing. When you compete in amateur boxing in Cameroon if you win you used to get a prize. The prizes were always in a big box, and you got to choose what you wanted. It could be a book, pencils, things like that, and I loved winning those things and giving them to friends and family, it made them happy.”

A place on the Cameroon national amateur boxing team was an opportunity for Bika to compete for his country at the highest level, but even more importantly provided him with some financial security. “In Cameroon, the government fund the national team and you are looked after with a flat and everything you need to train. The thing is what happens after for these boxers, if you are from Africa, and you want to become a professional boxer, unfortunately, the money is just not there to support you, you need to look further, which I had to do, and I was able to open doors for others.”

Bika traveled to Sydney for the 2000 Olympics as a light-middleweight, lost in the preliminary round to Scott MacIntosh of Canada but ended up meeting his wife Belinda. He laughs when he recalls their unlikely meeting by Sydney’s waterfront. “I was upset after losing my fight to the Canadian; the Olympics is a dream for every young fighter and mine had ended early. I went to Darling Harbour to have a drink and Belinda was there with her work who worked on the Olympics. She knew nothing about boxing, and I barely spoke English. We married a year later and have been together ever since.”

Bika’s wife not only helped him adapt to his new home in Australia, but she also helped him to find navigate his burgeoning fight career. “She was incredible in the support she gave me, my English was very limited, although I could understand most things, I couldn’t really speak it, and she was on the phone helping to find me part-time work to support my boxing, and even ringing around getting me a trainer.”

Thanks to Belinda, Bika located a trainer and gradually climbed the professional ladder in Australia, starting in small rugby league social clubs across the country. He built a reputation for incredible durability and eventually, Bika shared the ring with boxing luminaries such as Andre Ward and Joe Calzaghe, losing on points, but giving each champion an extremely uncomfortable night due to his relentless aggression.

“Those fights against Joe [Calzaghe] and Ward were experiences, but for good and bad reasons. Good in that you realize you can absolutely compete at that level, bad in that people see the problems that you can cause, and then in boxing, you get that reputation where no promoter wants to put their guy in there with you. People sometimes say I’m dirty. I’ve never been dirty; I just come to fight. That’s something I’m still coming up against even at forty now.”

Bika eventually won a world title against Marco Antonio Peribán Hernández in 2013, but he believes that his talent should have got him bigger fights in his adopted Australia. “It’s a funny one, in the world of boxing I get respected and a lot of affection, the UK and in America particularly, everyone knows you and wishes you well. Here in Australia, part of me loves the fact nobody knows me and I have been treated extremely well by the Australian public, but I was never allowed near the likes of Danny Green or Anthony Mundine.”

Former rugby league star Mundine and Green played out a rivalry in front of the Australian public that culminated in two extremely well-attended bouts in part due to pantomime prefight promotion with good against bad, yet Bika, arguably the most talented out of the three never got the same attention in his adopted land. “Honestly, I’ve never felt racism here in Australia, the people have only been good to me, but to gain publicity for me as a fighter they wanted to make me something I’m not, like a gangster, but I wanted to show that I’m respectable, which I stand by.” 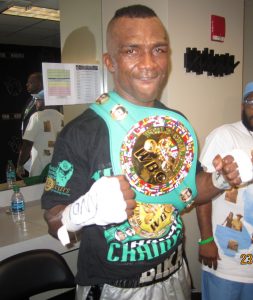 Bika briefly gazes around the shopping center café. Families in shorts are now queuing to see Santa Claus who is mercifully helped by a powerful air conditioning unit beside him. He smiles at the peculiar and uniquely Australian sight. Bika’s life of anonymity in suburban Sydney stands in stark contrast to his rare visits back home to Cameroon. “We have people like Samuel Eto’o who remain icons, and I’m not like them, but still it tends to go crazy when I go back. I can’t go out during the day as you get swarmed. When I go back I can only go out at night really with a hood up and walk the streets then. You appreciate the love you get, but it can be overwhelming.”

Although Bika is now a proud Australian, he is passionate about keeping the door open for Cameroon boxers and plans to open an academy for them to provide a direct route to professional boxing. He is desperate to fight any top contender at super-middleweight but understands that promoters do not have his name at the top of their appointment diaries.

“I will fight anyone, Callum Smith (the WBA world super-middleweight champion) you name it, I’m there, but I can’t keep waiting, I need to think of those coming behind me. There are so many talented young African fighters who just can’t get the same opportunities that I had. My plan is to set up an academy in Cameroon that helps those who want to become a professional and help them not only in the ring but outside through education and my experiences. This is a tough game, not just in the ring, but outside, you have to always be on your guard and I know I can be there to help that next generation succeed.”