The Fat Man in Heavyweight History 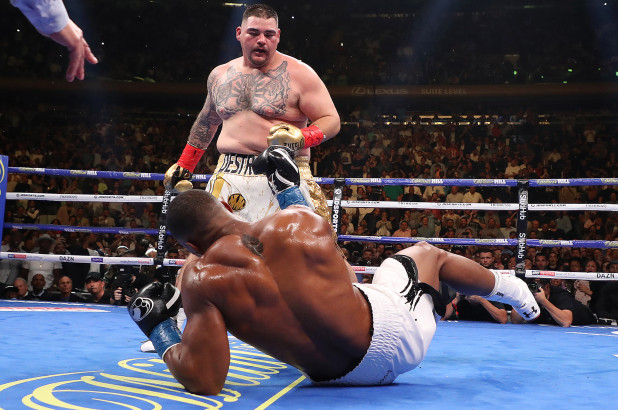 When Andy Ruiz, Jr.—all 268 pounds of him—dismantled heavyweight supernova Anthony Joshua at Madison Square Gardenless than two weeks ago, it triggered a feel-good frenzy that has yet to end. The shocking result has also, predictably, spurred the usual platitudinous attitudinizing from boxing media types who will now use this fight as a selling point for future mismatches.

Despite what the rearview experts have decreed, fat-shaming or lookism (certainly two great American social media pastimes) had less to do with downgrading Ruiz before the fight than practical analysis did. The real reason Ruiz was considered an exponential longshot was simple: he had never been anywhere near world-class level. His only moment against a top heavyweight came against erratic Joseph Parker in 2016, when he dropped a hairpin decision in Auckland, New Zealand. It was a dull affair and not one to inspire confidence in the future success of either fighter. In fact, Top Rank Promotions soon grew disenchanted with Ruiz and accepted a contractual buyout that Bob Arum surely regrets today. And while the concept of an elite fighter is now shaped primarily by market agendas via press releases, establishment reporters, and the vast public relations apparatus of networks, there was a marked difference between the careers of Ruiz, nearly ten years of milling on the fringes, and Joshua, an Olympic gold medalist with three-quarters of the heavyweight titles in his possession.

Even some of the harshest assessments of this fight acknowledged what was obvious: Andy Ruiz has talent. But a victory over Joshua was unthinkable not only because of class or form or over-spilling waistlines but because of the underlying forces that accompany every boxing match at this level—corporate interests. For Ruiz to have succeeded meant upsetting not only a world-class opponent but the carefully crafted strategies of a multinational company and a high-powered promoter with future millions at stake.

Another rationalization for doubting Ruiz, despite nonsense locutions such as “Boxing is not a swimsuit contest,” is precedent. In over 125 years of heavyweight championship history, which includes random title claimants of the splintered Alphabet Group era, there have been only a handful of tubby beltholders, and most of them materialized in the 1980s, under unique if dispiriting circumstances.

Until George Foreman lumbered back into the spotlight in the late ’80s and early ’90s, the patron saint of roly-poly heavyweights was, without a doubt, “Fat Boy” Willie Meehan, a carefree spoiler who gave Jack Dempsey fits throughout five fights. When Dempsey arrived in California in 1917 after his debacle against Fireman Jim Flynn (Dempsey was stopped in one round in a fight widely considered to be fixed), his first loss on the West Coast came at the hands of Meehan. Although Meehan had already scored a decision over Dempsey, it was his second victory over “The Manassa Mauler” in September 1918, however, that shook boxing. At that time, Dempsey had gained consensus status as the number-one contender (to idle champion Jess Willard) and was in the midst of a torrid KO streak, one that included a twenty-three-second demolition job of highly-rated Fred Fulton. Meehan, who openly stressed his antipathy toward training—delighted the crowd with his antics and waddled away with a decision and headlines across the country. Less than a year later, Dempsey was heavyweight champion of the world.

Then came the slovenly Tony Galento, a folk hero in a wife-beater, who earned a measure of notoriety by first insulting then decking Joe Louis. While Galento had his share of signature wins (including a gory mauling of Lou Nova), his popular everyman persona far outstripped his accomplishments. To complicate matters even further, some of his fights were fixed, calling into question his standing as a successful fat heavyweight.

Buster Mathis Sr. was talented enough to win a berth on the 1964 Olympic Team (he was replaced by Joe Frazier after suffering an injury), but his career was dominated by coverage of his girth and the diet he undertook at the insistence of his management in the late 1960s. Even as an amateur, Mathis was ridiculed by the press. “He wobbles. He quivers. He rolls. He shakes. He is a dripping mass of flesh, a monument of fat. He is 6 feet 3 and weighs 295 pounds. His waist is 44, his chest is 52, but sometimes in the heat of action, the measurements seem the other way around.” That was the lede from a Sports Illustrated article when Mathis was preparing for the Olympics.

For years punny (but not always funny) headlines followed Mathis wherever he went (“Quarry Tries to Cut Buster Down to Size”) and his own open embarrassment often made for grim reading. Twenty-five years after he retired, his son, Buster Mathis Jr., less talented but involved in his share of marquee fights, faced similar derision.

Except for Mathis, the tubby heavyweight did not return to any prominence until “The Lost Generation” belly-flopped onto the scene in the mid-1980s. The last portly heavyweights who enjoyed success at the top level were George Foreman and, to a slimmer extent, Michael Moorer. And that was well over 20 years ago. Before them, the Lost Generation of the mid-1980s—part of the Don King heavyweight daisy chain—performed in a parallel universe alongside fit athletes such as Michael Spinks, Mike Weaver, Pinklon Thomas, and even an aging Larry Holmes. Most of these fighters—Tim Witherspoon, James Broad, Tony Tubbs, David Bey, and Greg Page—were demoralized by their shared status as pawns of Don King. Because King controlled most of the top heavyweights—and had options clauses on them that meant the WBC and WBA heavyweight titles would remain under his promotional thumb indefinitely—it made no difference to him who won or lost. Add to this the usual King shenanigans—blank contracts, creative accounting, etc.—and these heavyweights had motivational issues that suggested the sporting equivalent of avolition.

Over the years, some class fighters who battled the bulge saw their careers flatline. After winning the undisputed heavyweight championship of the world, Riddick Bowe, who famously had a kitchen in his bedroom, sabotaged his promise with the devastating one-two combo of overeating and undertraining. His short title reign was not indicative of his potential. Similarly, Buster Douglas short-circuited his celebrity status in the wake of his storybook KO of Mike Tyson by noshing his way to an embarrassing loss to Evander Holyfield in his first title defense. Canadian heavyweight Kirk Johnson signaled his lack of ambition by entering his title fight against Vitaly Klitschko visibly jiggling. He was knocked out in two rounds. And whatever talent Cris Arreola had, it was wasted on the buffet line. An argument can made for Tyson Fury and Hasim Rahman also suffering from weight problems. Their performances were linked inextricably to their poundage: Fury beat Wladimir Klitschko for the heavyweight title when he tipped the scales at 247 and struggled in fights when he was clearly overweight. Rahman yo-yoed himself into and out of top billing in a few short years.

After nearing extinction over the last two decades, the tubby heavyweight has been reintroduced to the sporting mainstream by a cherubic young man from Imperial, California, who was given less than half a chance at bucking the odds. That a heretofore uninspiring journeyman could, in a single night, become the symbol of possibility in an often-joyless sport—one complicated by moral grayness, ethical grubbiness, and corporate greediness—is as much a delight as it is an astonishment.

The ring is an inhospitable place for the fit and the unfit alike; for the loafer, the laggard, the layabout, it is a potential danger. For Ruiz, the determining factor in his unlikely victory may not have involved overuse of the medicine ball, the Stairmaster, the slant board. No, it might have been hard, hard dreaming, then.

Ali And His Entourage: Life after the end of the greatest show on earth, by Gary Smith, Sports Illustrated

”What happened to the circus?”  Years after Muhammad Ali retired from the ring, Gary Smith asked that question.  Then, in 1988, he went out and answered it, tracking down the main characters of the rollicking Ali orbit, including Drew “Bundini” Brown and Dr. Ferdie Pacheco.   The result is a stunning panoramic view of lives found, lost, and sometimes found again.

Don Elbaum and boxing’s ‘beautiful sickness’ a match made in heaven, by Dave Hannigan, The Irish Times

Don Elbaum, one of the legendary rascals of boxing, surprisingly found himself inducted into the IBHOF this year.  This profile from The Irish Times delves into the particulars of a boxing lifer who represents both the zany and the flimflam aspects of a fringe sport.

Deadly 1962 boxing match leaves open wounds for Cuban American family, by Luis F. Sánchez, The Miami HeraldTwo years ago, The Miami Herald visited Luz “Lucy” Paret, a woman widowed by boxing.  She reminisced about her life with the ill-fated Benny Paret, killed in the ring in 1961.  “I met him 60 years ago and he died. He was a man who made his living in a rough sport, but he had a generous heart. I don’t even know what made me fall in love with him.”  The casualties of boxing are not solely found between the ropes.

“Don’t believe any of this bullshit.  And don’t ever take boxing seriously.  Don’t think that the boxing game is the kind of thing where you can actually identify who’s the top gunner and who’s not.  This kind of stuff ain’t serious. Ain’t nothing serious about the game.  Anybody that believes any of the bullshit that he reads is really, really in for a shock.  ‘Cause it’s never what you read and it’s damn sure never what you think.  Anything you read about or see in the ring, be sure to laugh.  Laugh first ‘cause that feels better than anything else I’ve ever done.”―Randall “Tex” Cobb