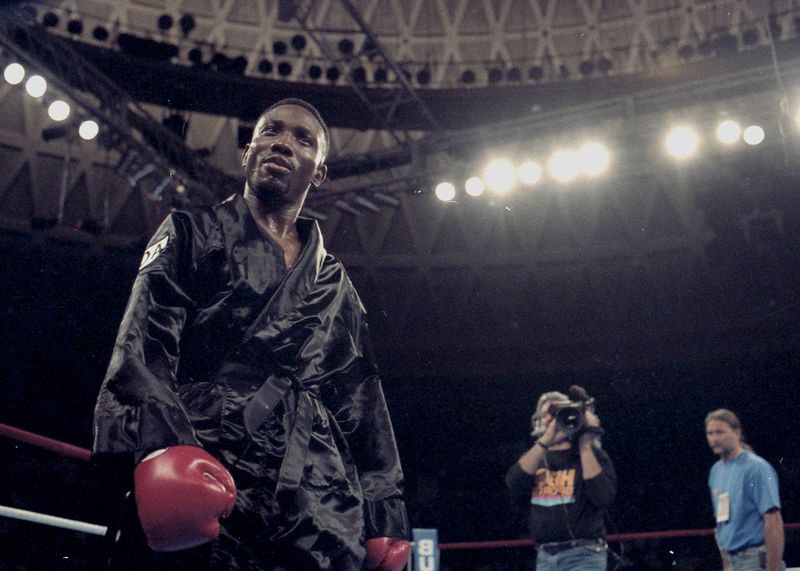 It took nearly fifteen years for Pernell Whitaker, who died on July 14 at the age of fifty-five, to lose a fight conclusively. In 1999, he dropped a bruising decision to Felix Trinidad, younger, bigger, stronger. By then, Whitaker was thirty-five years old and was struggling with drugs and alcohol. His previous fight, a win over Andrey Pestryaev, had morphed into a no-contest and he had been suspended from boxing in 1998 after failing more than one drug test.

Until “Tito” caught up with him—and fractured his jaw—Whitaker possessed a record marred solely by asterisks. “The Golden Boy,” Oscar De La Hoya, then approaching his crossover peak, hit the canvas against Whitaker and settled for an unconvincing albeit convenient lopsided decision. One of the true greats, Julio Cesar Chavez, limped away from the Alamodome in 1993 with a draw that sparked mass incredulity. But these debacles were nothing compared to the “L” Whitaker took against Jose Luis Ramirez in Levallois-Perret, France, a result that triggered memories of Frankie Carbo, Blinky Palermo, the boys in the ill-lit backroom, fedoras, stogies, and lowball glasses omnipresent—despite the fact that it was 1988. (A year and a half later, Whitaker avenged his fiasco against Ramirez in 1989 via his preferred method: a shutout decision.)

Although Whitaker, a gold medalist at the 1984 Olympics, signed a contract with ABC before turning pro, he was hardly phenom material early in his career. In late 1985, Whitaker broke his foot playing basketball and wound up sidelined. When he returned to the ring, he broke a bone in his hand while scoring a decision over John Montes. Another layoff followed. If Whitaker was more active over the next two years, he was not always impressive. Rafael Williams and Roger Mayweather both floored him, and his genius had not yet caught up to his showboating. When it finally did, however, Whitaker embarked on a run that few fighters have been able to match since. From 1989 to 1997, when De La Hoya squeaked by him, Whitaker became the undisputed lightweight champion of the world, won titles during pit stops at 140 and 154 pounds, and had a solid reign as welterweight champion. Along the way, he befuddled a slew of good fighters (Ramirez, Greg Haugen, Juan Nazario, Jorge Paez, Buddy McGirt, Wilfredo Rivera, Diolbys Hurtado) and some greats, as well (Azumah Nelson, Chavez, and De La Hoya).

And while Whitaker was never a fighter who quickened pulses with any regularity, he drew large crowds at The Scope in Norfolk, Virginia (where he was born), and was a solid ratings-draw on HBO, who billed “Sweet Pea” as the best fighter in the world, which, unlike so many other over-the-top claims from networks—and their media supplicants—in subsequent years, was actually irrefutable. A quicksilver southpaw whose defense, timing, reflexes, and ring IQ were uncanny, Whitaker often went twelve rounds effortlessly. At times, Whitaker drew criticism for his style, even from HBO, which was not always pleased with another 120-108 exhibition. “HBO can’t fight for me,” he told Wally Matthews in 1990. “HBO don’t take the punches. I give the people their money’s worth. They’re paying $600 a ticket. They don’t want to see no 18-second knockout.”

A pure boxer, Whitaker should not be confused with the spoilers of today who are mistakenly referred to as technicians. Bear hugs, armbars, and headlocks were not essential to his success. At his best, Whitaker used a ruthless finesse, largely improvisational, to make even world-class pros look listless, arthritic. Nor was he much of a runner after his lightweight reign. Most of the time, Whitaker stood in front of his opponent, made him miss with head movement or nifty footwork, and countered with pinpoint shots with either hand. “I’m not a knockout fighter,” he once said. “I’m a performer. I’m here to have fun in the ring. Not everybody can do that.”

As a defensive fighter, few could compare to Whitaker; as a fighting man, perhaps even fewer. That may sound surprising given how Whitaker approached most of his fights as a virtuoso. “Being an artist in the ring is most important,” Whitaker told KO in 1990. “When I get in there, I want it to be art. I work so hard in the gym, and the gym is where the real fight is. I got four and five guys to box. I spar with a guy, get tired, and then I got a fresh man to come. That’s tough. The easy part is in the ring on fight night. I’m a hyper guy. I get the music going, I get to dancing in the dressing room. I get everybody fired up. Because it’s time to party. I did all that work in the gym, and I’m ready to show what I got, to be an artist.”

But Whitaker was also a fierce competitor. Above all, it was his arrogance that made him a true great. Again and again, Whitaker sought to concretize his claims of greatness in the ring, a concept now as antiquated as fanny packs or dial-up modems. For Whitaker, winning a junior-middleweight title (in 1995 via decision over Julio Cesar Vasquez) was more or less a lark. He made unifying the lightweight title look as easy as Stu Ungar winning a freeze-out tournament against a class of middle-school kids. When Whitaker performed below his best or when doubts arose about his effectiveness—whether it was against McGirt or Wilfredo Rivera—he accepted rematches for the express purpose of setting the record straight. (Of course, McGirt had to stew for a bit and endure one slight after another en route to a second fight against Whitaker.) He was haughty, fearless, disdainful, and brash, and these traits drove him to pursue danger as often as possible. This was in the ’90s, when most purses were tied to risk and not to manufacturing marketing narratives to generate subscriptions for premium networks or to bolster start-up apps.

As the dominant years went by, Whitaker grew crabbier with the press and more dismissive of his opponents. “It doesn’t matter who I fight,” he announced in 1994, with an imperial air, “You could have a 900 number and take a poll. Let the people decide.”

Oh, fighters are still arrogant, of course (just spend a few minutes surfing the web or logging onto Twitter or, better yet, read a book), but Whitaker did not specialize in hollow boasting; did not yap about promotional divisions (surely the most embarrassing development among boxers in recent years); and did not mysteriously decline substantial purses offered to him. During his late stage, when personal problems threatened to overwhelm him, he even signed to face dangerous Ike Quartey, but that fight vanished when Whitaker failed yet another drug test. And his last significant outing—against Trinidad, a future Hall of Famer whose left hook was one of the deadliest weapons of the 1990s—came after a layoff of sixteen months and a stint in a rehab center. Even then, Whitaker could not be bothered with anything so prosaic as a tune-up. Facing Trinidad in the wake of so much turmoil was just another challenge for someone whose cerebral style often obscured a simple truth: he was a genuine fighting man, obsessed with proving his greatness in the ring. He did that, magnificently, many times over.

Beaten To The Draw, by William Nack, Sports Illustrated

In arguably his best performance, Pernell Whitaker neutralized Julio Cesar Chavez, then 87-0 (though he had been listed with a defeat in some earlier television appearances), throughout most of their pay-per-view extravaganza in San Antonio, Texas, only to wind up with a shameful draw for his efforts.  William Nack reported on the controversy for Sports Illustrated in 1993.

Rare was the New Yorker boxing piece not written by A.J. Liebling in the 1950s and 1960s.  Here, Jack Murphy visits with the always delightful Archie Moore for a personal portrait of “The Mongoose.” “I am a great sidewalk talker.  I can talk Mexican-fashion, squatting on my heels, or big-city style, with my spine up against a lamppost or a building, or even garment-center technique, with my backside at the edge of a curb.”

How Rocky Graziano Became Boxing’s Greatest Muse, by Nathan Ward, DeadspinThe underrated cultural impact of Rocky Graziano is explored in this piece by Nathan Ward.  “The Rock,” with his street corner sangfroid and Lower East Side cadence, was apparently some sort of influence on Method actors and the Hollywood rebel figures of the 1950s.

“I was 14 or 15 when I first started smoking weed and then snorting. I was making pretty good money when I was in school.  I was a pretty good hustler, and I worked as a busboy at the Holiday Inn. I kept it up, and then when I got into boxing, I’d only do it after fights. After I won, it would be partying time. Then I turned pro and had more money.  The connections got better. I stopped messing with the pushers and started with the smugglers. The prices were better.”―Michael Dokes