Pacquiao and Broner – Past and Future Unwittingly Collide 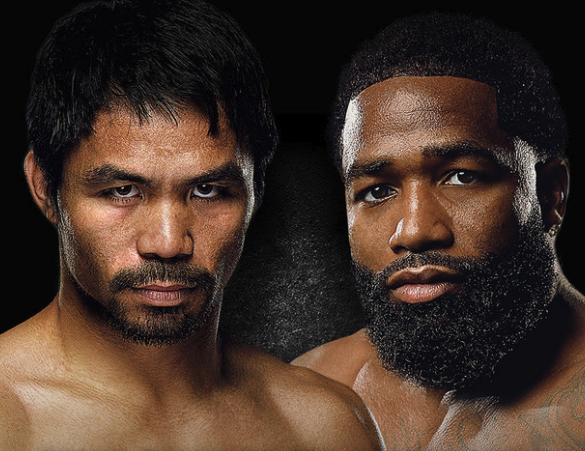 Even for boxing, long “The Outer Limits” of the sports world, Adrien Broner is unique.  “The Problem,” who faces creaky Manny Pacquiao on Saturday night in a pay-per-view pseudo-spectacular, is the only fighter in North America whose major selling point is a criminal disposition.  Out-of-the-ring drama, propelled by an active Instagram account and all-in coverage by TMZ, is all that keeps Broner relevant.  He is, for prizefighting, the embodiment of the term famesque.

Over the last twenty years, only Mike Tyson–disaster personified–and Tony Ayala, Jr.—who once entered the ring wearing an ankle monitor—can compare to Broner.  But Tyson had already built a legendary career by the time he became a sideshow attraction, and Ayala was looking to fulfill the promise of an earlier era, before his bloodlust led him to prison. In other words, both fighters had accomplished pasts before going off the rails. To this day, Broner, despite his dubious standing as a four-division champion, has defeated only a handful of notable fighters, some of them by the narrowest margins.

When Broner and Pacquiao square off, it will be as symbolic representatives of the future and the past, respectively.  If Broner is the first of the famous-for-being-famous pugs in the digital age, then Pacquiao may be the last of the genuine prizefighters, a man who sparked his own fortune between the ropes.
Recent shifts in the boxing mediascape all but guarantee that there will be more Adrien Broners in the future (not as charmless, perhaps) than Manny Pacquiaos.  The new broadcast scene—which includes ESPN, ESPN Plus, Fox, and DAZN–promises to have an adverse effect on an industry in constant flux. More than ever boxing suffers from–to borrow a phrase from David Shields–reality hunger, and that scenario will likely increase as the streaming boom continues.  To prove the superiority of its programming, each platform cultivates its own mythos with mini-documentaries, over-the-top ringside announcers, and a slew of paid media apparatchiks who double as writers. Certainly, there are enough world titles in circulation, like Iraqi Dinars, to keep the illusion of championship fighters afloat until doomsday.

Network affiliations, previously the roadblock to big fights, have now given way to tech agendas.  At ESPN, boxing is used to prop up a start-up; DAZN has written checks to Eddie Hearn and Saul Alvarez, with seemingly infinite zeroes, for narrowcasting strategies.  Showtime uses boxing to fill out blocks of dead time on its multiplex channels.  Because these networks have exclusive deals with promoters, the possibility of crossover fights is virtually impossible. Worse, fighters seem comfortable with the knowledge that the closest they will get to facing some of their biggest threats is on Twitter.

That kind of gridlock has existed, in various degrees, since the mid-1990s. But now there is a new twist.  For the first time since television went all-in on boxing in the late 1970s, sparking the 80s renaissance in America, there is not a single quality control consultant to be found in boxing. Alex Wallau at ABC, Ferdie Pacheco and Kevin Monoghan at NBC, Mort Sharnik at CBS, Brad Jacobs at USA, Arnie Rosenthal at SCORE, Dough Loughery (among others) at ESPN – all were tasked with programming fights at their respective networks. They did not always produce the best cards, but, theoretically, at least, they brought an organizing principle to their broadcasts. Believe it or not, the last buyer in boxing was the much-maligned Peter Nelson at HBO, whose insistence on maintaining control over the product for branding purposes—despite both a dwindling budget and dwindling enthusiasm for his passé vision—backfired spectacularly when Top Rank defected to ESPN in 2017. (At Showtime, Stephen Espinoza, who is, more or less, a walking rubber stamp for Al Haymon, hardly counts as a programmer.)

Every network currently airing boxing, regardless of platform, has ceded programming directly to promoters, the equivalent of putting Ted Bundy in charge of the entertainment.  It is almost as if executive suits are unaware of the longstanding reputations of promoters as shysters and chiselers. The modern godfather of promotional chicanery (slightly ahead of Bob Arum) is Don King, who once summed up boxing as well as anybody ever has: “You can’t believe anything anybody tells you in boxing.  The business is predicated on lies.  You are dealing with people who very rarely tell the truth.” Yet moneyed corporations have given carte blanche to promoters to do as they will. These are more than just output deals—King had plenty of pushback from Jay Larkin at Showtime during the mid-1990s, for example—they are attempts at creating in-house parallel universes.

At one time top fighters fought each other because such matchups produced the most revenue for everyone involved. Now, most fights generate nothing tangible outside of potential subscriptions. A promoter was once a figure whose livelihood depended on producing events that appealed to a paying public.  That definition has long verged on obsolete and it will further fade due to this new era of completely underwritten fight cards produced solely at the haphazard discretion of promoters.

There are still fighters who have proven themselves eager for competition: Oleksandr Usyk, Gennady Golovkin, Saul Alvarez, Srisaket Sor Rungvisai, and Shawn Porter.  And there are still solid matches signed and delivered (such as Wilder-Fury and Lomachenko-Pedraza) but overkill coverage means a future of undistinguished fights and fighters, (think Broner) whose profiles far exceed their accomplishments.

All fighters have had the same dreams for as long as boxing has been in the mainstream. Is it possible that these dreams seem smaller than ever?

THE MAGIC MAN TALKS BOXING: MY INTERVIEW WITH MARLON STARLING, by Mike Silver, Boxing Over Broadway

One of the last of the real professionals, Marlon “Moochie” Starling fought anybody willing to duck through the ropes against him.  For most of the 1980s, Starling earned a second nickname—“Spoiler”—for wrecking the dreams of one upstart after another.  Mike Silver interviewed Starling recently for Boxing Over Broadway.

ALMOST A HERO FORMER HEAVYWEIGHT CHAMP MAX SCHMELING WAS MERELY HUMAN IN AN ERA OF GREAT INHUMANITY–A GERMAN WHO WAS A LOYAL FRIEND OF JEWS BUT ALSO A WILLING PAWN OF HITLER, by Frank Deford, Sports IllustratedFrank Deford despised boxing, but his complex portrait of ex-heavyweight champion Max Schmeling, the first boxer to defeat Joe Louis, reveals the man behind the controversial sporting figure.

“We would have had a great reality show back in 1988.  I say this with all modesty, I started the whole bling-bling look with my customized stretch limos and collection of Rolls and Lamborghinis.  P. Diddy and them were trying their best to get in our camp, but we set the tone.  I started the trends that were followed by today’s hip hop moguls.  I was the first to buy Rolls Royces and Ferraris.  In 1985 what other black guy in his twenties was buying these cars—legally?  And I didn’t have just one.  I had a fleet of them.  These up-and-coming hip hop stars used to throw after-parties for our fights.  They didn’t even know what Bentleys were.  They thought those were old man’s cars.  And back in the 80s, I was gutting them out and putting Gucci and refrigerators in them.  I even put a hot tub in one of my limousines.  I know I was the first to put a fax machine in a car.”―Mike Tyson

End of the Line: Bobby Chacon on Skid Row