Now What for Terence Crawford? 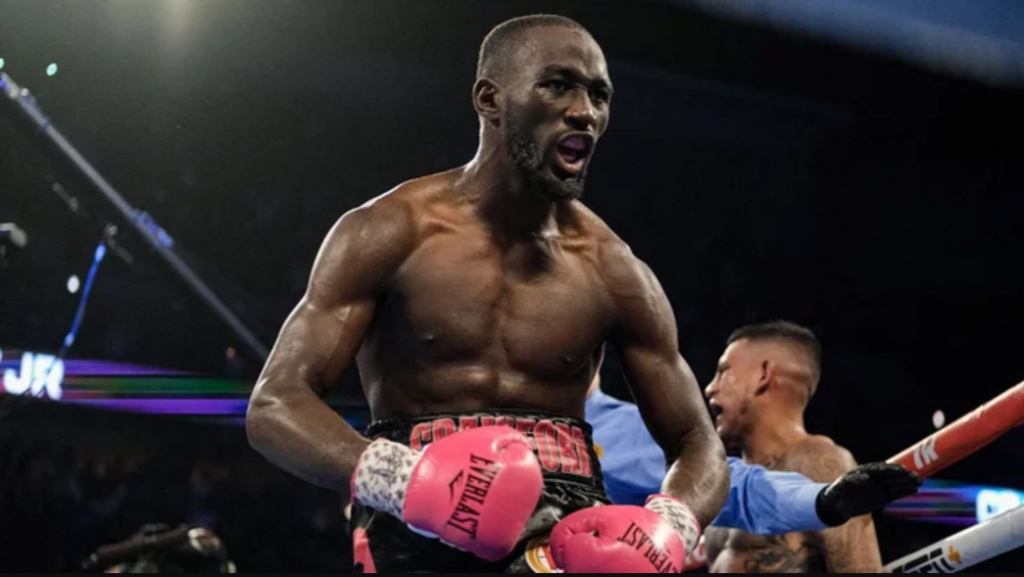 In front of his typical enthusiastic following at the CHI Health Center in his hometown of Omaha, Nebraska, WBO welterweight titlist, Terence Crawford dispatched of Jose Benavidez, Jr., via TKO in the 12th round in front of a national audience on ESPN on Saturday night.

The fact that he came out victorious was no surprise; after all, Crawford was a sizable favorite coming in and Benavidez, while a decent prizefighter, had a more notable backstory outside the ring than one inside of it. Just a couple of years ago he was seemingly targeted in a shooting while walking his pets, and for a spell, his career was put in jeopardy.

Yes, pair that with Crawford’s own ‘dicey’ situation years ago, when he was struck by a bullet, and you could say that this was a battle of two ‘shot’ fighters.

The lead-up to this contest was certainly spirited, as Benavidez showed plenty of hubris in confronting Crawford in the past at other Top Rank promotions and things reached a climax at the weigh-in on Friday when Benavidez shoved the defending champion as they squared off for the cameras. A sweeping right hand from Crawford fortunately missed Benavidez before the mini-fracas was broken up by the two camps and members of the Omaha police department.

Unfortunately for Benavidez, that would be about the last time he would be able to out-box Crawford. While he had some success early – as some opponents do against the calculating Crawford – over time Crawford was able to diagnose and then dissect Benavidez and soon this became a one-man exhibition featuring the skill and class of Omaha’s finest.

A picture-perfect uppercut from Crawford sent Benavidez sprawling to the canvas in the final round and after gathering himself gamely, he was hit by a barrage of punches that gave referee Celestino Ruiz no choice but to wave off the fight. For Crawford (who improved to 34-0 with 25 KOs) it was another notch on his belt. For Benavidez, it was a lesson in being careful what to wish for.

So, the question is very simple for Crawford: what and who is next?

There is no denying that craft and the credentials of ‘Bud.’ Having won titles at lightweight, junior welterweight (where he achieved the rare status of consolidating all four major belts), and welterweight, he has gained acceptance as one of the premier prizefighters in the world. Many pundits and observers have him on top of their fabled pound-for-pound lists (which are oftentimes more flights of fantasy than a look at reality) but this much is clear: Crawford is among the short list of truly elite boxers in the game today.

Any grouping that includes the likes of Crawford, Vasyl Lomachenko, Naoyo Inoue, Mikey Garcia, Saul Alvarez, Oleksandr Usyk, and Gennady Golovkin – in any order – really can’t be debated. It doesn’t take long to call roll in this class.

But Crawford – much like the technically gifted Garcia – is a boxer that while winning world titles at various weight classes (which is much easier to do in the modern age of boxing with the proliferation of sanctioning bodies) has never truly had a career-defining victory or a historical run in any of the divisions in which he’s won belts.

At 135 he defeated Ricky Burns in his backyard in Glasgow, Scotland, to win the WBO strap. Crawford then proceeded to defend against the likes of Yuriorkis Gamboa and Ray Beltran. Soon after, he moved up to 140 to face Thomas Dulorme for the vacant WBO junior welterweight title and after scoring a sixth-round stoppage, he faced the likes of Dierry Jean, Henry Lundy, Viktor Postol (the WBC titlist), John Molina, Felix Diaz and Julius Indongo (who had the IBF and WBA belts in his possession). And back this past June he halted the rather limited Jeff Horn in nine frames to win his welterweight championship.

So as you look at his resume, you say to yourself, ‘It’s more solid than spectacular.’ But much of this really isn’t his fault. Crawford, like many other marquee names in this era, is, unfortunately, the victim of a fractured business where television and promotional alliances trump public demand for certain fights.

The most anticipated welterweight bout currently is one that would pit Crawford versus the highly regarded Errol Spence, who is the IBF champ. It’s a match-up of two undefeated American boxers in their physical primes and one of the best fights that could be made in all of combat sports. Unfortunately, Crawford is promoted by Top Rank, which has an exclusive deal with ESPN, while Spence is aligned with Al Haymon and the Premiere Boxing Champions, meaning his bouts moving forward will be broadcast on Showtime and FOX (which is now partnering up with Al Haymon to televise a series of shows). The real fight here is really in making this come to fruition.

And as you look at the welterweight landscape, most of the other well-known 147 pounders (Shawn Porter, Keith ‘Remember Him?’ Thurman, Danny Garcia, and Adrien Broner) are aligned with the PBC as well.

Crawford is a gifted artist inside the ring, the question now is: will he be reduced to performing solo?

Roberto Jose Andrade Franco details the struggles and hopes of two boxing gyms in Dallas, Texas, for D Magazine.  In poorer neighborhoods, boxing gyms often double as community centers, and the Casa Guanajuato and Vivero Boxing Gyms are perfect examples of the social impact boxing can sometimes have.  This profile of two gyms highlights the budding dreams of young men and women even as encroaching gentrification threatens to wake them, abruptly, from their hopes.

Last month, the Atlantic City boxing community gathered to mourn the loss of Qa’id Muhammad, a fighter who trained at the Mayweather Boxing Club.  On September 13, Muhammad was found murdered, his body dumped in a Nevada desert.  Legal troubles kept Muhammad out of the ring for years, but he was planning a comeback for the end of the year.   Qa’id Muhammad was 29 years old.

The Fight of His Life—Jeff Miller, Texas Monthly

A few years ago, Jeff Miller checked in on Terry Daniels, the heavyweight journeyman best known for being annihilated by Joe Frazier in a farcical title fight.  For some reason, Daniels, a college graduate with a middle-class background, continued fighting after losing to Frazier, and descended into trialhorse status.  Eventually, the beatings left him with pugilistic dementia.  For a while, at least, Daniels earned a certain amount of fame.  “I lived like a rock star for about six months.”

“Slowly but surely, I began to gather what the press called an “entourage.”  At the time, I desperately wanted some sort of family.  Because of my own family’s inability to love me for who I was, I replaced them with a group of people who I thought loved me.  Boy, was I ever wrong.  They loved being around the champ.  They loved the perks of fame.  They loved my wallet and once all my money was gone, so were they.  At the time, I didn’t see it that way.  In fact, I didn’t see anything, because I was so blinded by fame …. I even made it official when I dubbed my entourage ‘The Hawk Troopers.’  Each member of the Hawk Troopers wore an official Confederate Civil War style cap with a hawk insignia on it.  In addition, I had to officially swear them in one by one, while each one raised their right hand.  I was dead serious when I did this.” —Aaron Pryor

DAY OF THE FIGHT: A Stanley Kubrick Production