Episode #6—Don Stradley, is an award-winning boxing journalist whose work has appeared in The Ring, Ringside Seat, and ESPN.com. Listen to the interview with Don here: iTunes | Soundcloud | Google Play | Spotify. 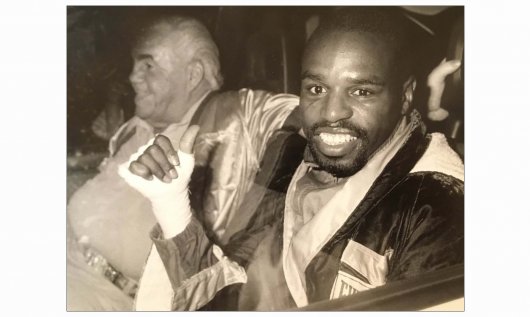 In his last bleak years, Rocky Lockridge, who died on February 7, was more famous for a pair of ubiquitous video clips than he was for his accomplishments in the ring.  YouTube footage of Lockridge, decked out in orange pants, a fuchsia shirt, and a fedora, flattening an overweight bully outside of a convenience store a few years ago even popped up on the websites for The Daily Star and The Daly Mail.

Most infamously, Lockridge appeared on an episode of “Intervention,” where his cry of anguish sparked, as is seemingly the norm in the (anti)social media age, both sympathy and mockery.  That cry, however, was the boxing equivalent of the Edvard Munch painting, “The Scream,” and its echo haunts anyone who understands the hazards prizefighters face—in the ring and out.

At the peak of his career, Rocky Lockridge was good enough to push a young Julio Cesar Chavez to the limit and to batter Wilfredo Gomez around the ring en route to losing a scandalous hometown decision.  Even when he was on the downside, Lockridge had enough to fend off talented Harold Knight and to wage toe-to-toe warfare against Tony Lopez in a sold-out Arco Arena in Sacramento.  As usual, Lockridge was up against it, on the road against stiff opposition.  These factors put Lockridge at a distinct disadvantage everywhere but where it mattered most to a true professional: his bank account.

His good looks, pleasant manners, and solid right hand were not enough for superstar status, however. Without the showcase smile of Sugar Ray Leonard, the madcap stylings of Hector Camacho, or the electrifying KO power of Thomas Hearns and Mike Tyson, Lockridge was forced to put the risk-and-reward ratio in play with nearly every fight.  To his never-ending credit, Lockridge was a genuine headliner for nearly a decade in an era when fighters, for the most part, were not corporate widgets operating in a subsidized economy.

Although the Eighties kickstarted Alphabet Soup mania (the IBF and WBO were both formed, presumably with their own codes of Omerta, during the decade), it was also a far tougher era than it is today. There were fewer champions (up to 60% fewer when you factor in the outlandish “interim” and “super” titleholders of today) and fewer weight classes.  More important, perhaps, there was less corporate control of the fight racket; getting too mixed up in a sordid pursuit such as boxing was once considered a PR faux pas by network television. Back then, all networks wanted were ratings and drama; now multi-media platforms want vertical integration, shoulder programming, plug-in content, and branding rights to mediocre product.

In the early 1980s, a shot at the featherweight title meant challenging either Salvador Sanchez or Eusebio Pedroza, a one-two Hall of Fame combination that produced also-rans the way New York City produced mugging victims at the time. Lockridge dropped two hairpin decisions to Pedroza, in 1980 and 1983, before winning his first world title with an upset kayo over Roger Mayweather on February 26, 1984.

During his championship run, rumors of his nighthawk ways were rampant. Lockridge liked to party, which may not have been much of a surprise given that he had once been the drummer of a funk rock band (“Ricky Lockridge and the Ready-made Family”) back in his hometown of Tacoma, Washington. And his association with 1970s amateur star Johnny Bumphus, his childhood friend, a burnt-out case in his 20s, was another red flag.

When Lockridge finally retired in 1993, after the obligatory unsuccessful comeback, what was once recreational became essential.  The former William Paterson College student, clean-cut and articulate, if somewhat prone to 80s excess, soon became a crack addict, and then a disintegrating soul who eventually lost his wife, his children, his savings.  In 1997, Lockridge was sentenced to 27 months in prison on a burglary conviction.  When he was released, he was homeless.  For six or seven years, Lockridge scuffled on the streets of Camden, New Jersey, one of the most dangerous cities in America, and unraveled bit by bit, sometimes under the gaze of the conscienceless. “There’s a lot of down-lookers out there,” Lockridge told the Philadelphia Daily News in 2006. “A lot of folks like seeing you in the quicksand.”

The question, then, is this: was boxing a determining factor in the sad fate of Rocky Lockridge?

As a world-class fighter, Lockridge had already proven himself susceptible to drinking. He also dabbled in cocaine (an 80s fad that does not necessarily mark Lockridge as deviant or even some sort of amoral outlier), but his world did not begin to crumble until after his career was over.  Then came the swift, appalling downfall. “I could not handle not being involved in the fight game,” Lockridge said in 2009, “not being a fighter or even partaking in the fight game as a trainer and/or manager.”

Although Lockridge did not die of complications from CTE, and several strokes over the years hobbled him physically and cognitively, which makes it difficult to link his deterioration to his profession, the fact remains that he took punishment from the best fighters of his era—sometimes in 15-round bouts—and that he fought too long.   Damage to the prefrontal cortex (as well as the loss of synaptic connections due to repeated blows to the head) not only manifests itself physically but emotionally as well.  Fighters often become depressed or suicidal; they suffer from a loss of impulse control, become aggressive, and engage in poor decision-making.  In effect, their personalities are altered post-retirement.

In recent years, Riddick Bowe and Clifford Ettienne both used brain damage sustained from their boxing careers as a partial defense for their myriad legal troubles.  A pitiful Johnny Saxton, former welterweight champion of the world, found sympathy from the courts because of his shambolic demeanor. And a lifetime ago, journeyman lightweight Del Fontaine gained a certain amount of tabloid notoriety when he his lawyers invoked “punch drunkenness” as a defense after Fontaine had murdered a waitress.  Ultimately, Fontaine was found guilty and hanged in London.

It remains to be seen whether Lockridge experienced the after-effects of an arduous career, but the possibility is always there for a fighter.   When the Retired Boxers Foundation became involved with Lockridge, Jacquie Richardson, at the time Executive Director, said this about his case: “Boxers don’t always want to accept help.  Beyond brain injuries, the shame is overwhelming.  They have regrets about what they didn’t do, the mistakes they made, and it’s really hard to forgive themselves.  It keeps them hiding out where they are.”

As the last pre-Alphabet soup era recedes into blurred and blurring history, like rotary phones or Cold War panic, we should remember not just the accomplishments of someone like Rocky Lockridge, but how those accomplishments compare to the spurious milestones of today.  We should also remember that the harder road of the past also led to the nightmare dead end of far, far too many futures.

Name of the Father, by Tim Struby, Photography by Nils Ericson, Victory Journal

Son of a brutal mob enforcer, Jarrod Tillinghast turned to boxing for stability.  Before long, however, the lure of the streets proved too much for him.  Although Tillinghast was considered a hot prospect in New England when he turned pro in the mid-1990s, he could never dedicate himself to the sport that offered him a way out.  Tim Struby recounts his story for Victory Journal.

To mark the 50th anniversary of Fat City, arguably the best boxing novel ever written, Leonard Gardner spoke to The Paris Review in a wide-ranging interview that covers the book, the film, and boxing in general. “I was not interested in a beautiful tourist spot,” Gardner says. “I never wanted to write about society people or something like that. I was interested in the rougher side of life. There’s something about struggling people, poor people, that’s dramatic. Struggle is dramatic. I’ve had friends who wrote pretty good novels about college boys and college professors. I didn’t dislike them. But it’s a matter of drama. For a lot of people, real life is a struggle.”

For six years, Wright Thompson searched for Jimmy Robinson, who suffered a first-round KO at the hands of Muhammad Ali in 1961, without success.  Like so many fighters who viewed boxing as a sustenance pursuit, Robinson had disappeared, his only hint of fame earned entirely in retrospect.  In pursuit of a historical footnote, Thompson encounters a world of squalor and broken dreams.

“I don’t want to say that my era was the best, but it really is true.  The ’40s were one of the greatest eras in boxing because the kids who were fighting then all grew up in the Depression.  Everyone was hungry.  That’s why there were more fighters fighting at that time than at any time in the history of boxing.  The athletes today are bigger, stronger, and faster, but they’re not smarter and they’re not tougher.  Today in boxing, they don’t give a guy a chance to develop his trade.  They have 10 or 15 fights and they’re fighting for the championship.  I had almost 100 fights before I fought for a championship.  Guys like Robinson, Archie Moore, and Willie Pep had over 200.  Today, a guy with 25 or 35 fights is ready to retire.”―Jake LaMotta 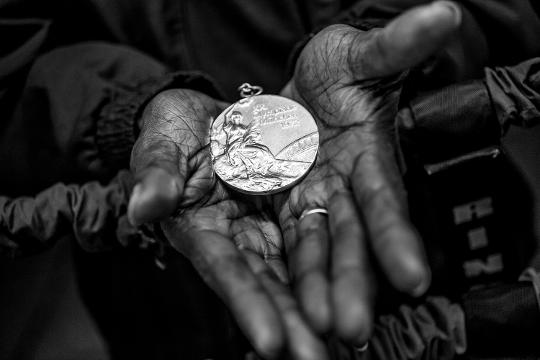