Based on the book Bundini: Don’t Believe The Hype, the first biography of Drew “Bundini” Brown, Patrick Green’s documentary provides a snapshot into the life of a cultural icon. Fifty years after he coined the iconic phrase “Float like a butterfly, sting like a bee,” Drew “Bundini” Brown remains one of boxing’s most mysterious and misunderstood figures. Cornerman and confidant to two of the greatest fighters ever―Sugar Ray Robinson and Muhammad Ali―Brown lived an extraordinary American life. Brown’s impact on the sport and the culture at large is undeniable, yet his story has been largely untold… until now.

Curtis Cokes, Hard Winner
by Carlos Acevedo, Author of  Sporting Blood: Tales From The Dark Side Of Boxing 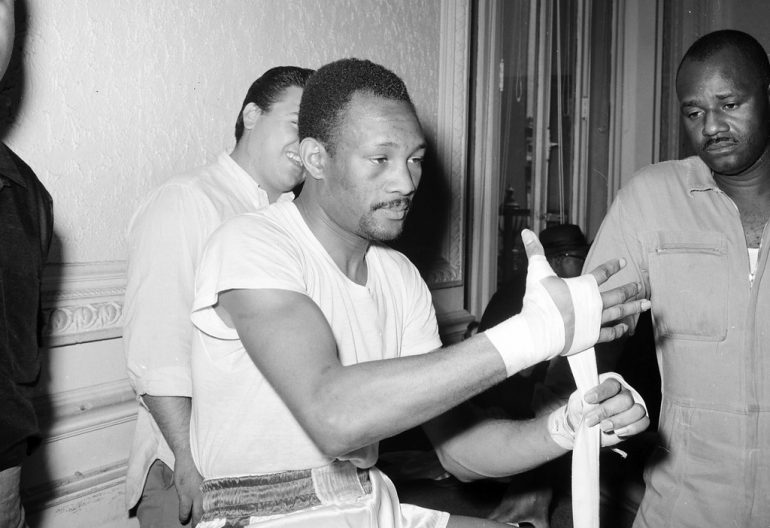 “I can stretch my hands straight over my head and I can reach the sky. That’s as high as any man can reach.”—Curtis Cokes

Not even boxing, with its egalitarian ethos, would give Curtis Cokes a break. At least not in Dallas. Texas was a Jim Crow state, and Cokes was barred from competing in the Golden Gloves, which were segregated. Although Cokes might have fought in the odd smoker here or there, he did not have a single recorded amateur bout. He turned pro in 1958, only a few years after the Texas Court of Civic Appeals struck down legislation prohibiting interracial fights. When Cokes began his career, it was with zero fanfare and no endgame in sight. “After ten fights as a pro, I think I was a good open-amateur fighter,” he once said. “I was learning to fight as I fought. That’s the hard way.”

If there is anything to say about the American experience in boxing from the mid-1960s until the mid-1970s, it will invariably include the word “hard.” Cokes, who died on May 29, was one of the last American fighters who held a title during that arduous span. (An unofficial tally reveals that only two remain: Freddie Little and Carlos Ortiz.)

An all-around athlete, Cokes received a scholarship to Morgan State for basketball and tried out for the Brooklyn Dodgers as a shortstop. But at around five feet eight, Cokes was too small for both pursuits. (Cokes did play semipro baseball for a season or two, however, with the Dallas Bombers in the 1950s.) He had never attended a live fight before deciding on fisticuffs as a career.

By day, Cokes was a custodian; by night he was a prelim fighter whose pro debut came against the man he would eventually defeat for a world title: Manny Gonzalez, an illiterate ragpicker who dreamed about a brighter future for his family.

With a background in YMCA gym scraps—and with a trainer who had once been a carnival fighter—Cokes struggled through a grueling apprenticeship of the sort that no longer exists. More than once, he quit the game altogether, disgusted by the meager paydays, the wearying travel, the hard knocks against the likes of Gonzalez, Rip Randall, Stefan Redl, Kenny Lane, Luis Rodriguez, and Manuel Alvarez. Recognition was as scarce as a good dollar for Cokes. After all, television had nearly abandoned non-heavyweights in the mid-1960s, the Dallas–Fort Worth area could hardly be considered a boxing hotbed (the Sportatorium, where Cokes fought often early in his career, was already falling apart), and the matchups were often made tougher by a hectic schedule. Indeed, Cokes fought so often and so indiscriminately that his final record of 62-14-4 amounts to a guesstimate. “We had some fights in Waco, Texas, that really weren’t sanctioned,” he told Robert Cassiddy Jr. “We didn’t get them recorded.”

When Cokes finally landed on television, he dropped a bruising decision to Jose Stable and was annihilated by destructive Philly playboy Stanley “Kitten” Hayward. After dropping a decision to the tricky Eddie Pace in 1964, Cokes announced his retirement. He was talked back into gloving up again by his trainer, Robert “Cornbread” Smith, who used a parable about “The Bear” to convince Cokes to fight again. A puzzled reporter for World Boxing asked Cokes about this strange tale of a bear. “What bear?” Cokes replied. “You never heard of the bear? Stop fighting and you’ll sure run into him. Bear back and bear table, that’s what bear will be looking for you. I thought of that bear when I fought Jean Josselin for the title. You know, I feel he’s there. Right behind me. Sometimes I turn around and look.”

When Emile Griffith vacated his title to campaign as a middleweight, Cokes entered a mini-tournament to crown his successor. His qualifying bout came against former champion Luis Rodriguez on July 6, 1966, less than two months before Cokes challenged for the title. Cokes became the first man to stop Rodriguez, who had gone the distance against Rubin “Hurricane” Carter (twice), Emile Griffith (three times), and, in previous fights, Cokes (twice). Cokes was pushing thirty when he finally won a championship, outpointing Manny Gonzalez on August 24, 1966, in a dreadful waltz for the WBA/WBC welterweight title. (For winning one of the storied titles in history, Cokes earned $5,000.) This was a time when earning split or disputed recognition was not the aspiration that it is today, when fighters are almost giddy at being ¼ “world champion” and when the corporate power structure underwrites one dubious title fight after another in the name of producing content. To earn universal recognition (from the holdout New York State Athletic Commission, among other official skeptics), Cokes took on Jean Josselin in Dallas a few months later. “When I beat Manny, I thought I was world champion,” Cokes told The Ring in 2003. “Then they told me I had to win another fight, I said, ‘Here I go again.’ So I was kind of frustrated. Then they brought Josselin in. I beat him, and it was over with.”

No sport is as illusory as boxing, however, and no sport is as meretricious. That arbitrary combination bushwhacked Cokes only a few months after he defeated Josselin, when California decided to recognize Oakland stylist Charlie Shipes as welterweight champion of the world. There was no thought of letting Shipes continue as a parallel titlist indefinitely, no phony war of words leading nowhere, no drawn-out financial wranglings.

Less than a year after beating Josselin for what he thought was universal recognition, Cokes hit the road and obliterated Shipes, scoring an eighth-round TKO at the Oakland Arena. A pair of title defenses (sandwiched between a slew of over-the-weight fights) followed, but Cokes was already decelerating when he ran into a buzzsaw named Jose Napoles. For the biggest payday of his career—$80,000—Cokes once again hit the road to answer the bell against a fan favorite in California. Napoles stopped Cokes on April 18, 1969, and he repeated the violent feat two months later in Mexico City.

There were the usual hard times when his career was over. His nightclub burned down, his diminishment into steppingstone status saw him lose to mediocrities on the road, from Sacramento to South Africa, and he declared bankruptcy in 1971. But Cokes never forgot the importance of community ties. Even when he was champion, he had founded and financed the Curtis Cokes Youth Club in South Dallas, hoping to keep wayward kids off the streets and out of trouble. And in defiance of his own bleak experience as an aspiring fighter, Cokes made sure his center was integrated. “It’s for the kids no matter what color they are. In a sporting event, a Negro is just another athlete. That’s the way it should be in everything.”

Cokes was a quiet man whose demeanor was reflected in his ring-style: a smooth counterpuncher with neat footwork and a sneaky right hand. This lack of flash between the ropes may have made it harder for him to connect with the bloodthirsty peanut gallery, but his mellowness made him the perfect counterpoint to the volcanic Susan Tyrrell and the smoldering Stacy Keach in Fat City, where Cokes played the beleaguered character named Earl.

“I don’t just bring the guys tapes and show me beating up on someone,” Cokes once said about his training philosophy. “I show them getting my ass kicked because it could happen to them. You can’t just stop because you get beat. You have to keep going. It’s part of the game—winning and losing.”

For nearly thirty years, Cokes reigned as the only world champion Dallas had produced (the second was his protege, Quincy Taylor), but he never felt particularly cherished by his city. “It becomes frustrating,” he told the Dallas Observer in 1998. “You get a little bitter.” Curtis Cokes lost some of that bitterness when he was inducted into the International Boxing Hall of Fame in 2003, a hard winner to the last.

(This month’s Roundup is curated by Hannibal’s founders)

“Swimming without getting wet
Is hard like eating without food
Or starving without hunger
Or driving without a car.
You prefer heavyweight
For fighters but podcasts
Are jejune. You are a very
Busy man. You wield a pool
Noodle in sleep. Not phallocentric
But the pool noodle made local”… [complete text here]

“Q: What makes boxing so beautiful to you?

Paz: I believe that, well—this applies to all fighting, so I guess I’m not directly answering your question, but there’s something beautiful about “me versus you.” My will versus yours. Will versus skill. No one to blame, no teammate to blame. This is raw, animal instinct, yet, it is so scientific. So difficult to master. Check hooks, torque in the hips—things that can’t be taught. The greatest fighters in any discipline of fighting, in the history of fighting, did things like that. The greatest fighters did things you can’t teach. There’s a beauty in that.”

“One aspect of boxing — the knockdown — epitomizes a portion of its peculiarity. Even among the wider array of combat sports around today, boxing’s knockdown remains unique in its ability to both score points and temporarily stop the ongoing action.

“The ultimate goal for a fighter is truth.
If he can be truthful with himself, if he can look on his limitations then he can work on it.
If he understands what he does well and then enhance it.
But he has to deal in truth.―Naazim Richardson

Johnny Tapia, a boxing genius who couldn’t, in the end, defeat his demons.