*(We are working on an international solution to order directly)

A Short History of Hatred
by Carlos Acevedo, Author of  Sporting Blood: Tales From The Dark Side Of Boxing 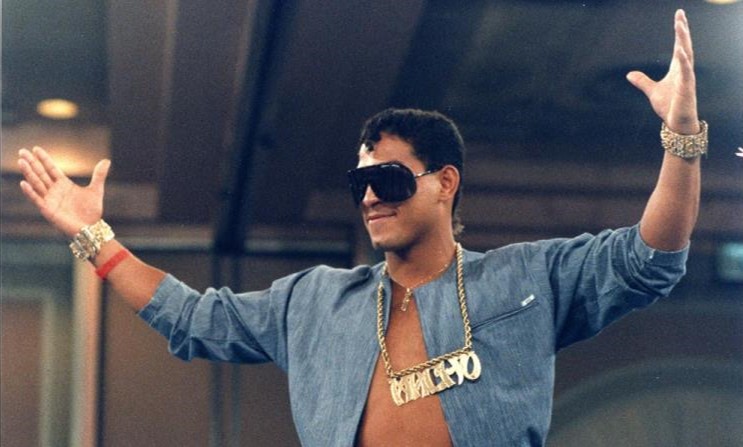 Because of its one-on-one aspect, and because of its lack of obscurants (helmets, uniforms, masks), boxing has always encouraged identification—or overidentification—in its audience. And while there are hundreds of fighters who were beloved for partisan reasons, boxing history is also full of glove slingers who were notorious for being hated. (There is a difference, naturally, between the pug who is unpopular because of his style or his record and the boxer who draws an almost visceral response from an audience.)

One of the first fighters to inspire feverish animosity was also one of the most accomplished. Racism made heavyweight champion Jack Johnson the most hated man in America for nearly a decade, but it is worth pointing out that Johnson seemed to relish his role as an agitator. By shocking, mocking, and socking his (mostly) white title challengers, he also sneered at the dehumanizing mores of a country consumed by bigotry.

Although he became one of the most beloved boxers in history, as well as an American folk hero, Jack Dempsey drew more jeers than cheers at one point. His reputation as a slacker (and the salacious trial that saw him acquitted of draft dodging) dogged him for years. “During those early years after I had beaten Willard,” Dempsey wrote in his memoir, Round by Round. “I was probably the most cordially disliked champion that ever lived.”

Few fighters can compare to Jack Sharkey for sheer disdain. Sharkey earned the ire of spectators along the eastern seaboard with an assortment of antics—ranging from weeping in the ring to heckling the crowd—that often compounded the strange results of some of his bouts. To his credit, Sharkey was cognizant of his reputation and understood its remunerative quality. “They called me crybaby,” he told Peter Heller. “They called me ‘The Lispin’ Lith,’ ‘The Garrulous Gob,’ ‘The Weeping Warrior,’ tack different titles on you. But it didn’t bother me as long as I got the old paycheck.”

In the early 1940s, Al “Bummy” Davis, who nearly started a riot after being disqualified against Fritzie Zivic, was one of the few fighters who carried the banner of the loveless in boxing during the war years. Then came “the Bronx Bull,” Jake LaMotta. Loutish, abrasive, and antisocial, LaMotta had long been disliked, but he kept turnstiles in perpetual motion because of a palpable fearlessness and a brutish ring style. His unapt and inept belly flop against Billy Fox in 1947 changed all that. LaMotta was so openly insolent in performing his mafia-produced dive that all of New York City mutinied against him. LaMotta, of whom Jimmy Cannon once wrote was “probably the most despised man of his generation,” was a schadenfreude special for the rest of his career.

One of the most important transition figures of the 1950s was the now mostly-forgotten lightweight/welterweight nuisance Art Aragon, the original “Golden Boy” and one of the true prizefight provocateurs. For years Aragon was the kingpin of the L.A. cash registers—an astonishing feat when one considers that he was neither of Mexican descent nor a heavyweight—packing venues and raking in startling paydays at Legion Stadium and the Olympic Auditorium. His over-the-top smugness carried with it a hint of self-consciousness, paving the way for the performance-art theatrics of Muhammad Ali. “You ever get booed by ten thousand people?” Aragon once said. “It’s exciting.”

As baleful as an undertaker, Sonny Liston mostly troubled municipalities and the sanctimonious who viewed the troubled heavyweight champion as a moral affront. Although Liston was never a popular champion, his low Q-rating seemed oddly bureaucratic.

This was not the case with his successor, who rode the zeitgeist and his magnetism to become the most notorious athlete in history. The cultural shockwaves of the Sixties extended to boxing as well when Cassius Clay/Muhammad Ali burst onto the scene like a fireball. A nonstop braggart, Ali became Public Enemy #1 in the sports world, a distinction that lasted longer than most boxing careers “One thing people can’t stand is a blowhard,” Ali told Sports Illustrated in 1964, “and the more I blew, the more people would come to see me get beaten.”

Although Ali had a lot of cornball in him (the Gorgeous George influence was deep), by the time he became a defending heavyweight champion he was radioactive. To some, it is surprising that Ali was far more reviled than he was revered in the 1960s, but his rebel spirit irked the “Silent Majority,” and his trailblazing opposition to the Vietnam War left him open to charges of being unpatriotic. Ali also dominated the 1970s with the same tactics but now with a shocking cutting-edge response from his audience: laughter and applause.

For nearly twenty years, no one could compete against Ali as a lightning-rod showman, but that all changed when Hector Camacho and the garish 1980s arrived. To his flashy southpaw style and his electro-funk fashion sense, Camacho added a splash of street-punk dash. An HBO profile of Camacho, aired before his title defense against Rafael Solis, revealed a young man reveling in ghettodom. “Out here I walk down the street,” he said at one point, “and I see a guy just beating on a guy with a bat. I go, ‘Jesus Christ! Hit him again!’” For mainland Puerto Ricans, long an embattled minority in New York (despite their status as American citizens), Camacho was a walking stereotype; to middle-America, he was proof that White Flight was justified. Both demographics were certain to heed his fights—if only to see him get his comeuppance in the ring.

After Camacho, dozens of fighters—from journeymen to contenders—cultivated abrasive alter egos, donned increasingly ridiculous costumes, and produced ring walks marked by pyrotechnics, fog machines, laser lights, and soundtracks loud enough to drown out a Motorhead concert. Most notable of all these Camacho acolytes was “Prince” Naseem Hamed, the pint-sized Pierrot with a powerhouse punch.

The Digital Age generated the most successful loud target since Muhammad Ali, when Floyd Mayweather Jr. adopted a cartoonish persona, part hip-hop fantasy, part Lifestyles of the Rich and Famous, and part Hollywood screenplay. No boxer ever earned as much money as Floyd Mayweather Jr. and no boxer has sold so many pay-per-views. Mayweather was perfectly poised to exploit both the new HTML world of self-branding and the reality-television craze (in his case, “24/7” on HBO). Of course, it helped that Mayweather was also an elite boxer, one who just happened to realize that crassness was on its way to becoming the new American pastime.

In the pre-internet era, being unpleasant had real-world limits. An unremitting jerk could browbeat or belittle his co-workers during office hours or his family at night (and on weekends, naturally), and everyday interactions with bus drivers or waitresses or retail clerks were choice potential moments for condescension. Now, however, the opportunity to be our worst selves is endless. Muhammad Ali may have been a ceaseless publicity hound, and in the 1970s he certainly seemed to be everywhere—a hectoring Zelig—but his every action was not disseminated instantaneously across multiple communications platforms. Instagram, Twitter, Facebook, and a thousand clickbait websites encourage overkill exhibitionism, and this is where the modern fighter cultivates enmity. But the question for boxers looking to monetize obnoxious personas in the twenty-first century is simple: will (anti)social media translate into ratings, pay-per-view sales, or box-office success?

The possible answer to this question may lie in the example of Adrien Broner. A journeyman talent whose distinction as a “four-division world champion” epitomizes the spurious nature of modern boxing, Broner has not won a fight in more than three years, but his online antics (combined with the occasional real-world transgression) keep him in perpetual demand in a sport with limited viewership. But the fact remains that Broner has rarely produced blockbuster figures—no matter the platform.

Fighters may encourage emoji responses, snarky comments on TMZ, retweets, and obligatory scolding from pharaonic bloggers, but will they ever achieve the kind of organic animus that will galvanize the sporting masses? Will they ever produce the strange memories that stayed with Art Aragon for the rest of his life? “You know, what I remember even more than my fights and all the boos when I fought, was the nights I’d go to the Olympic with some broad, just to watch a fight …And all I had to do was just walk down the aisle to my seat. Right away, the boos would start coming down from the balcony. By the time I’d reach my seat, they’d have to stop the fight until everyone settled down. The entire crowd would be on its feet, booing. I loved it. I do miss that.”

(This month’s Roundup is curated by Hannibal’s founders)

If the opening round was a three-minute-long ‘Oops’ for Gatti, the round that followed was a three-minute-long ‘Oh shit.’ He came out bending deep at the knees, utilizing head movement, and pumping the jab. He was trying to box intelligently. But Rodriguez’s jab was finding a home anyway, and a minute into the round, Gatti’s right eye was as messy as his left. ‘I think Gatti is in real trouble unless he can do something dramatic, guys,’ declared color analyst Larry Merchant. They were all about to find out what real trouble truly looked like.”

“Mitch Green had never been a world champion, but Lou Thesz agreed that he’d fit the bill as an opponent for Inoki. Blood had enormous size, he had a distinctive look, he had the big, menacing voice, and he had street credentials that were tantamount to shoot credentials to a gullible public.”

“In the early parts of the 20th century, boxing—and other ‘manly’ sports, like college football—helped calm the fears that for white men, ‘oversentimentality, oversoftness, … washiness and mushiness’ were grave dangers.”

“I look at ordinary people in their suits, them with no scars, and I’m different. I don’t fit with them. I’m where everybody’s got scar tissue on their eyes and got noses like saddles. I go to conventions of old fighters like me and I see the scar tissue and all them flat noses and it’s beautiful. … They talk like me, like they got rocks in their throats. Beautiful!”—Willie Pastrano