The following is an excerpt from Roadhouse Blues: Morrison, the Doors and the Death Days of the Sixties by Bob Batchelor, now available from Hamilcar Publications.

I remember the exact moment I fell in love with Jim Morrison and the Doors.

The summer of 1986 I was seventeen. I lived with my aunt and her family in a beat-up trailer in a little collection of six or so of them near my hometown. Because she and my uncle worked pretty much around the clock, they needed help around the house. I needed to escape a less-than-satisfying living situation. One week they took their two little girls camping—probably their only vacation that summer and definitely unpaid from their jobs. I doubt they even had benefits. My grandmother had given me a couple bags of food and a little cash to, as she said, “make sure you don’t starve.”

My buddies—Chris, Mersh, and B. T.—had already taken the money over to the beer distributor in our little Western Pennsylvania college town, waiting to ambush an unsuspecting college student: “Will you buy us some beer, man? We’ll give you the change.” It always worked . . . and they rarely took the money, of course, since they had been in our shoes in the not-so-recent past.

Mersh, the fastest of the fast-talkers among our friends, persuaded the student to get us a keg, putting down a deposit and signing a fake name. I don’t remember the exact cost, but the rotgut we drank back then was probably around twenty bucks, plus ten for the deposit. We had also each squirreled away a motley crew of liberated beers, half-empty bottles of whiskey, and pilfered vodkas from various family members, refrigerators out in the garage, and older siblings.

We had a heck of a party that first night, just the four of us and a handful of close friends. Nothing major—sedate and full of music, singing, and happiness about being alive and alone. The next morning, with the sun just cresting the horizon, I woke up on a couch in the screened-in porch to a familiar sound—“Roadhouse Blues” by the Doors.

Sliding through the door, I saw B. T. standing over the keg—which had mysteriously moved from the outdoor fridge to now sit in an oversized barrel in the middle of the living room—just as Morrison exclaimed that he woke up to get himself a beer. In that moment, the sunlight glinting through the windows, feeling the majesty of not having any adults around, and seeing one of my best friends pour himself a beer at sunrise elated me. I fell in love with the Doors instantly after simply digging them for years. 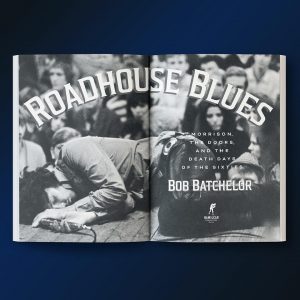 Then (as now), Morrison personified the idea of revolt and standing up to authority, thus his appeal to young people—particularly men—has been in how one can live that experience within the limitations of ever-present authority. In the case of my friends in the 1980s, living a kind of quasi-Footloose existence in a tiny, conservative town, putting Jim’s perceived hedonism on a pedestal allowed us to think we were rebels or radicals.

Constantly under pressure from teachers, coaches, and parents (Baby Boomers who were erratically in and out of the picture, wantonly asserting dominance and sometimes disappearing completely), we found dark gods in the Doors. We could imagine Morrison dying for our sins. He was brave where we were weak. Emulating him, we could be whoever we wanted, if only for a night in a drunken haze.

Our high school was odd—you had to choose sides on just about everything, including music heroes. As a result, you were peer-pressured into choosing between the Beatles and the Stones and the Doors or Led Zeppelin. No one slid between teams—one or the other! If anything personifies the 1980s more, there were actually knockdown, drag-out fistfights over these selections. Even though I know this was a questionable position, I have to admit that I’m still not much of a Beatles fan—though certainly understand their significance—and, of course, I like Zeppelin, but in a qualified way.

More than thirty-five years later, however, I still love the Doors, even as that specific memory fades. I doubt B. T. would remember that morning or that still-cold draft he poured—I haven’t talked to him since he hightailed it out of PA in the early Nineties, though I hear from his sister that he’s doing well out in the wilds of the Great American West. And I could write an entire book about the individual and collective lives of the people I introduced in this little story; how they unraveled and reassembled over the decades.

What still resonates, though, is that a bright, shining flash in a young life filled with heartache and true despair led all these years later to the book you’re reading. There are countless people who have a connection to a band or performer, book, film, or television show that mysteriously changed them.

My love affair with the Doors and Jim Morrison has never ended and has instead plunged me deeper into an attempt to get at who he was and what their music has meant to an audience that must number in the hundreds of millions. I think a biographer or historian is often directed toward a topic. The eminent writer Jerome Charyn, one of the greatest authors this nation has ever produced, once told me: “All my books are really about me.” Roadhouse Blues fits within Charyn’s sentiment.

I want to understand Morrison and the Doors because I want to decipher my own life, as well as America writ large across the ages. Yet how do you put something as large and complex as America into words or even a single person? A writer can never really understand what is inside the mind of another person. Even if we spent a lifetime trying, we could never fully unravel their thoughts, no matter the level of deep conversation, analysis, and thinking that takes place. Even then, we only see the masks our subjects are willing to show or reveal.

My mental model of cultural history is that one takes context and influences from every aspect of life to create as full a portrait as possible of a topic, person, or thing. Picking apart the assumptions or legends of a life and then trying to add to the body of knowledge is a worthy—and frequently difficult—task that necessitates the synthesis of mountains of information. Yet there are always holes to fill in and that takes interrogation, inference, and examination. To paraphrase my mentor Phillip Sipiora: one does not need to find answers, the power is in the analysis. 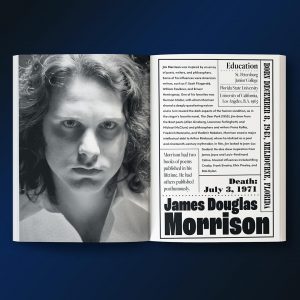 The goal of Roadhouse Blues is straightforward—to examine how the Doors became the Doors, think through their lasting impact on American and global culture, and assess how we have traditionally thought about Jim Morrison versus how we might revise that thinking based on new ideas and interpretations.

For example, there are many laughable moments with Morrison—his life was decidedly not all doom and gloom or drugs and alcohol. Just about everyone who knew him and put their memories down in print said that he loved to laugh and had several corny (definitely not PC) one-liners at his disposal that cracked him up every time he repeated them.

What few have fully captured is the complexity of the individual life. Here’s a guy who clearly is relentlessly intellectually curious. He bats ideas around like a cat with a toy, but sometimes uses his wit to outthink and possibly even manipulate those around him. Morrison has an intense, and seemingly cemented, worldview. These principles guide him. Yet so does his growing alcohol dependency.

Look at the lyrics, the mammoth collection of poems, other writing he did, the interviews and appearances. These all are apart from the amazing music he and the Doors made—wholly unique to their era and today. No one else sounds like the Doors.

So Morrison lived as and became a creative force, but over time he regretted that it was in music and not writing. He attacked fame but came to realize the cost to his true nature. Then the arrests, the pressures, the dependency. Jim had a vision of what life could become and lived on a trajectory that led to an ignoble end.

What I do know for sure—because I’ve had this discussion with many, many people—is that my love for the Doors and the forever-young Jim Morrison is not unique, nor will it end soon.

About Hamilcar Publications 9 Articles
Hamilcar Publications is a Boston-based publisher focused on professional boxing, true crime, hip-hop, and more. Their books appeal to fans of these fascinating, often-intersecting worlds as well as to readers who are simply passionate about great nonfiction storytelling and beautiful book design.