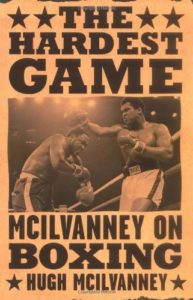 Of all the striking facts about The Hardest Game—a collection of boxing reportage by Hugh McIlvanney—one stands out above all: most of these exquisite pieces were written on deadline. Whether for The Observer, The Sunday Times, or Sports Illustrated, McIlvanney, over the course of fifty years, illuminated the often chiaroscuro world of prizefighting with erudition and empathy, subtlety and sympathy, all while eyeing the domineering timeclock. Sentimentality—the inescapable quicksand of most sportswriters—is rare, although McIlvanney does suffer occasionally from nationalist wistfulness, a prerequisite, it seems, for UK scribes.

McIlvanney was influenced to take up a position on press row by A.J. Liebling, whose compilation, The Sweet Science, is both an enduring classic and a strong case of literary sui generis. Inevitably, McIlvanney finds himself a consensus runner-up to the boisterous stylings of his inspiration, despite a far more modern outlook on a sport that is simultaneously text and subtext at nearly every turn.

Of course, boxing had changed drastically between the time Liebling began writing about it for the amusement of middlebrow New Yorker subscribers during the tranquilized Fifties and McIlvanney started at The Observer, but not much: McIlvanney and Liebling overlapped in the early 1960s (Liebling died in 1963) and yet the differences between the two wordsmiths are stark.

There is little blood in Liebling; the dreary afterlives of fighters, the broken men who haunt the fringes of the vocation that brought them so low after so many highs, go largely unmentioned. Grifters, gangsters, death, crime, morality—all the dark undercurrents of boxing given short shrift in favor of an arch tone that sometimes borders on condescension. In The Hardest Game, McIlvanney recognizes boxing as a pit stop for borderline personalities, as a free-booty enterprise with few regulations, as an anachronistic pastime for civilized societies, as a moral challenge to humanist values, as a small-scale socioeconomic case study, and, yes, as a sport, one whose bleak nuances he understood all too well. His ringside reports reveal an unusual critical intellect to go along with penetrating observations and an often-meditative tone. Here it is worth quoting the lede for “A Kind of Requiem,” his stirring account of “The Thrilla in Manila,” in full:

It takes a rare purity of spirit to irrigate the moral and aesthetic desert that is forever threatening to engulf the world of heavyweight boxing. What we saw in Quezon City, capital of the Philippines, in midweek represented a shining flood of that purity. To say so is not to claim that the third and last meeting of Joe Frazier and Muhammad Ali would leave all who witnessed it ready to embrace the values of the prize-ring. Those 40-odd minutes of unremitting violence must have had the opposite effect on many. They would recoil from the thought that two men who are formidable in so many ways should seek to express themselves through an exchange of suffering, and especially that they would wince at the sight of Frazier, his marvelous body reduced to a dilapidated, lurching vehicle for his unyielding will, reeling blindly in the murderous crossfire of the world champion’s final assaults.

The first thing you notice about The Hardest Game, in fact, is its tone. It is not hard-boiled, it is not knowing, it is not, as Liebling can sometimes be, flippant. Nor are there any self-aggrandizing attempts to equate boxing with writing (a trend Liebling might have kickstarted, later picked up, like a particularly strong contact high, by Mailer, Dan Halpern, and many pale academics who may or may not have ever seen the inside of a boxing gym) or puffing it up with overblown metaphors first popularized for sports by the anthropologist Clifford Geertz (in his essay on cockfighting) and then morphing into the lingua franca of Sokal Hoax post-modernists for the last thirty years. Very little is safe from the American progeny of Derrida, Lacan, and Baudrillard, and boxing is no exception, although a pursuit as plainly outre as a blood sport hardly seems to merit such mumbo jumbo. After all, boxing—concretely, not metaphorically—evokes race, class, morality, sociology, and economics at nearly every turn, and embellishing it with pseudo-profundities seems counterproductive. The drama of the ring itself—and the drama of the lives that lead so many to risk injury for uncertain rewards—is what McIlvanney illuminates time and again.

As far as the symbolic externalization of certain themes and conceits goes, boxing certainly lends itself to intellectual clam chowder-ism, but McIlvanney avoids oracular pretension in favor of the things in themselves.

Muhammad Ali and Mike Tyson—the top two pound-for-pound larger-than-life fighters of the last fifty years—get most of the page count here, and McIlvanney evokes their unique, often disturbing, presences with aplomb. (On publicity releases concerning the intellectual journey Tyson was taking while in prison: “To learn as much as his more ardent admirers say he already has, he would surely have to spend as long in the slammer as the Birdman of Alcatraz.”)

There are also a few pieces that focus on the U.K. scene of the 1960s and 1970s, an underrepresented era, for the most part, with George Whiting (Great Fights of the Sixties) the only standout to cover a relatively fallow time for prizefighting in Britain. McIlvanney reports on the hapless albeit beloved bleeder Henry Cooper with a mix of respect and regret, and gives us an unforgettable glimpse of Ken Buchanan, a man seemingly unable to enjoy his sudden fame as lightweight champion without embittering his reign. “From his early boyhood he had harboured a deep sense of persecution,” McIlvanney writes, “a resentful belief that the other children in his working-class district—and their parents, too—were determined to leave him in despised isolation. Now he saw his triumphs less as a key to popularity than as a bludgeon to put down those who had denied it to him in the past.”

By the time the 1990s rolled around, McIlvanney was fortunate to have more than just Alan Minter, Jim Watt, Colin Jones, Lloyd Honeyghan, and Frank Bruno to ruminate over. Strange new talents began to light up the U.K. (Chris Eubank, Lennox Lewis, Nigel Benn, Naseem Hamed) and the mock bureaucratic red tape of various sanctioning bodies added a new Kafkaesque wrinkle to parse. The result is an absorbing overview of the 1990s boxing milieu—both in the States and abroad—that includes some raw trial coverage of Tyson and a chronicle of the early ’90s heavyweight scene so chaotic it deserves reappraisal on several levels.

As a stylist, Liebling is matchless (and, likely, unmatchable), even if his grandiloquent musings are often inapropos, but McIlvanney has a hard-edged lyricism rooted in a simple truth never far from the surface: boxing, like bullfighting, is a serious business in practice, no matter what one thinks of it in principle. At times, The Hardest Game suggests that it was composed based on the doctrine of Guy de Maupassant, who insisted that literature reveal “humanity bleeding.”

“Onward Virgin Soldier,” and “Johnny Owen’s Last Fight,” a diptych destined to be anthologized forever (at least by competent editors), is a touching profile of ill-fated bantamweight Johnny Owen, a fighter so seemingly mismatched with his chosen calling that its fatal consequences are both foreseeable and, again and again, no matter how often you return to his story, heartbreaking. “Outside the ring he was an inaudible and almost invisible personality. Inside, he became astonishingly positive and self-assured. He seemed to be more at home there than anywhere else. It is a tragedy that he found himself articulate in such a dangerous language.”

About Carlos Acevedo 44 Articles
Carlos Acevedo is an award-winning boxing writer and was the founder of The Cruelest Sport and is a member of the Boxing Writers Association of America. His work has appeared in Inside HBO Boxing, Undisputed Champion Network, Boxing News, Remezcla, Boxing Digest, and Esquina Boxeo.  His stories “A Darkness Made to Order” and “A Ghost Orbiting Forever” both won first place awards from the BWAA. He is a member of the International Boxing Research Organization (IBRO). Carlos is the author of Sporting Blood, published by Hamilcar Publications. Connect with Carlos on Twitter @cruelestsport.